28 August - Stopped by a stick 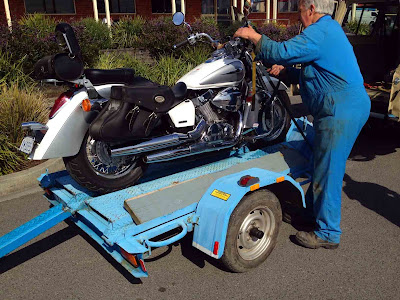 Took off this morning on the Honda in fine, sunny conditions with the aim of visiting towns along the South Gippsland Highway. Had a great ride as far as Korumburra where trouble struck. As I pulled into Kelly's cafe for lunch and a coffee I noticed a small stick, part of a tree branch, protruding from the bottom of the bike on the left hand side. No recollection of riding over it so I switched the bike off and attempted to remove it but found it was stuck pretty tight. A closer look revealed it had in fact punctured the main cooling hose from the water pump to the engine head and as I finally freed it a steady drip of green coolant began from the damaged hose. Bugger!!
Fortunately the bike is covered by Honda Rider Assist, and a quick phone call resulted in the promise that help would arrive within the hour. I barely had time to finish lunch before my rescuer arrived and we loaded the bike on to his trailer, to be transported to the Honda dealer in nearby Leongatha. He told me he was quite surprised. He had never had to rescue a Honda before, the majority of his calls were for another (US based) brand of bike. So, within an hour of striking trouble, the bike was up on a hoist to confirm that the punctured hose was indeed the culprit. The next hurdle was a replacement hose. No stock and the earliest arrival in the country would be 9 September, and I was now 80 km from home with no transport of any kind. Time to improvise. Frank, my friendly mechanic agreed that a temporary repair would probably get me home, so out with the superglue, a bit of old tyre tube and some cable ties and the bike was as good as new. Well at least the hose wasn't leaking. Rode it all the way back to Traralgon, with a stop every 10 km or so and never lost a drop of coolant. I really appreciated the good service received from Honda Rider Assist, and the persistence and ingenuity of Frank at Knight's Honda in Leongatha. So now the Honda will be stabled for a while awaiting the arrival of a new water pump hose. 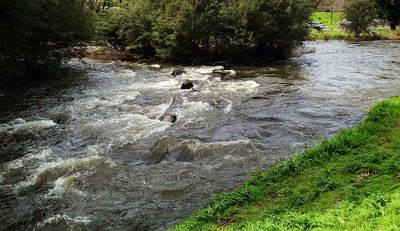 After a string of miserable days today finally looked promising. Reasonably clear sky and it actually felt warm outside at around 10 a.m. Fired up the BMW and took the back road (Noojee, Powelltown) to Warburton for lunch. The town was the quietest I had ever seen it. Probably because it was Monday, in any case I had the cafe all to myself and had a quiet lunch. Went for a walk along the Yarra River after lunch. The constant rain of the last few days has turned the normally placid stream into a raging torrent, much to the delight of the local duck population. By the time I was ready to ride home the temperature had dropped 5 degrees, and as I approached home it was getting windy and chilly. Nevertheless, one of those perfect rides where everything just clicks.

Absolutely terrible motorbike weather the last week or so and this morning, while the sky was clear, there was a gale blowing and the forecast was for rain - bugger! I was really hanging out for a ride and just after lunch it got the better of me, and I decided to brave the conditions for a quick coffee in Walhalla on the Honda. The wind was as bad as it looked until I got into the hills where the road is well protected and then conditions became almost pleasant. As the road is lined by large trees I took it fairly easy, fearing a branch or a whole tree across the road, and sure enough, as I rounded one bend there was a whole tree across the road. Luckily a bunch of SES volunteers had got to it and were in the process of cutting it up and there was a gap wide enough for the bike. 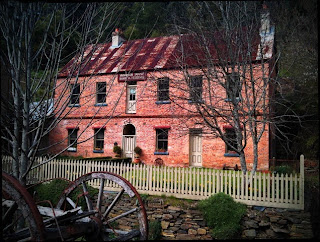 Walhalla today is the remnant of a once booming gold mining town. Mining took place between 1863 and the early 1900's, and altogether some 55 tonnes of gold were recovered. At its peak it housed some 2500 permanent residents - today there are only a handful. Windsor House (see picture) was a wealthy merchant's house. It fell into decay over the years but in recent times it has been renovated and now operates as a B&B.

Today the town was celebrating its 150 year anniversary and there were people everywhere. After a quick lunch it was time to ride home to find that the wind had died down a lot. I'm glad I persisted as in the end it was a quick but enjoyable outing.

Amidst a long run of shitty days, today looked like the only possibility for a decent motorbike ride.
On many previous trips to Philip Island I have ridden past the National Vietnam Veterans Museum and thought I should stop and visit some time soon. Today I decided to make this the purpose of my ride and so I ventured across the San Remo bridge to visit the NVVM which is located right next door to the airport. The NVVM is a privately owned museum started by Vietnam veterans and it first opened its doors in 2007. 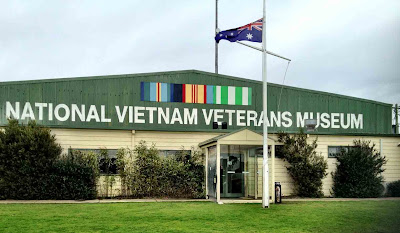 The museum features a great exhibition of vehicles, aircraft and weapons as well as an extensive collection of memorabilia and photographs. As well as Bell, Huey and Wessex helicopters there is even a Canberra bomber which is undergoing a process of restoration. The museum also features a small gift shop and cafe and with a reasonable entry price ($9 for us seniors) it is well worth a visit. One display provides a photo and short bio of all the Australians who were killed in Vietnam and it didn't take me long to find the name of Adrian Rich, a local boy from Morwell who was killed in the conflict. Most of us knew Adrian and when he was killed it brought the seriousness of the Vietnam conflict home to those of us fortunate enough to escape conscription. 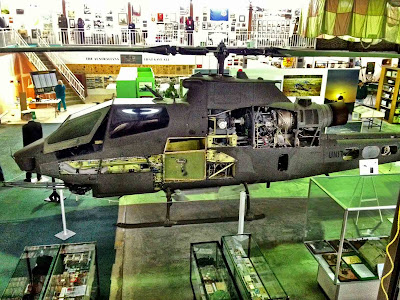 Altogether the museum is well worth a visit and the 20 minute video presentation about the war is also worth a look.
Made the return trip through Korumburra and short coffee stop at the local bakery. 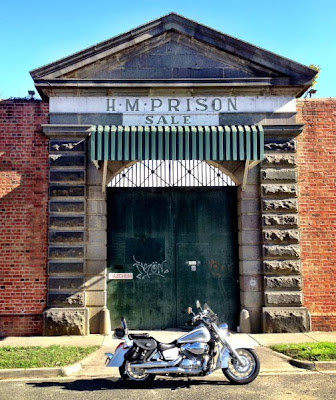 Woke up to a foggy morning which promised a sunny day. Rode the Honda to Sale for a bite to eat and a chance to take a look of a bit of local history. H.M. Prison Sale was built in 1887 and was always a source of morbid fascination when I first came to Gippsland as a teenager. Unlike a modern prison the site was almost totally obscured by a high and imposing brick wall which made it an eerie and fascinating place. It ceased operation in 1997 with the establishment of a new, privately owned facility nearby, and since that time has undergone a gradual process of demolition. All that remains now is a section of the front wall and the main gate. Not sure if this will be preserved as part of Sale's historical heritage, and so I thought I'd get a picture of it just in case.

After lunch the ride continued down the South Gippsland Highway, through Longford and past the Omega transmission tower which is still standing as a relic to the cold war and pre satellite era of communication. Turned right at the beach town of Woodside for a return trip through Gormandale.