Travelled down to Melbourne today on the train to visit the Motorcycle Expo held in November every second year. Zane and Bailey came too. As I usually do I slept all the way from Morwell to Dandenong - 8:00 am is an early start for me these days. This was the third day of the show and the attendance looked a bit light on when we got there about 10:30. The stand I enjoyed most was one which was selling fully restored classic bikes. Some real blasts from the past restored to absolutely pristine conditions. 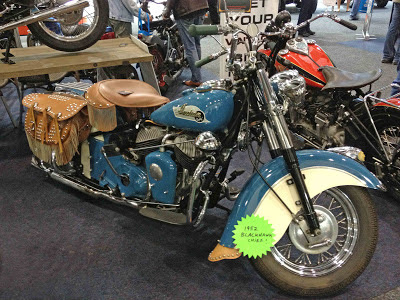 This was my favourite, a 1952 Indian Blackhawk Chief, a beautifully restored treasure. A look at a lot of new bikes confirmed that I made the right choice when I bought the BMW F650GS. The most interesting part of the show was seeing a lot of unusual bikes including the Royal Enfield range. These iconic machines, originally engineered and produced in the UK are now made in India and are apparently indestructible and very competitively priced. 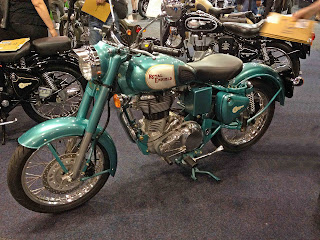 The last hour of the show was spent comparing all the adventure bikes for size and I took a quick picture of Bailey sitting on the Kawasaki 650 Versys which is a great bike and incredible value at $10k. He looked quite at home.

After a very nice lunch in one of the cafes at Crown Casino I once again fell asleep on the train trip home. 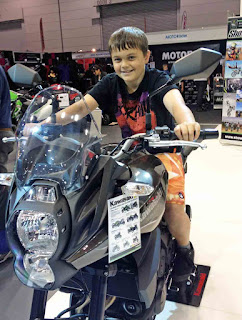 Posted by Theo van der Meulen at 4:11 PM No comments:

The forecast was for a great riding day - a top of 35ºC. That seemed like the perfect opportunity for a ride down to Tidal River on Wilsons Prom. Rode down there, non stop under perfect blue sky and a slowly increasing temperature. The camping area at Tidal River was almost full as many people seemed to have taken advantage of the opportunity to emerge from winter woes. The final approach to the tidal river is a fantastic ride. High vantage points and sweeping bends provide tantalising view of the ocean and the mountainous terrain. After  a great hamburger it was time for the return trip back through Mirboo Nth and a coffee at the Bullock Dray. Got home around 3:30 after a very enjoyable day's riding. 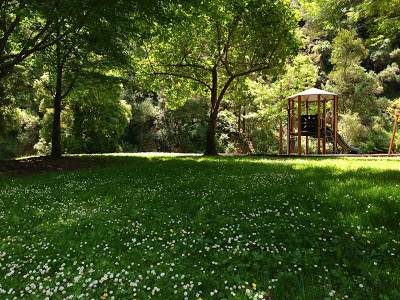 Looked out the window this morning and decided against a ride. Lots of cloud and quite a bit of wind. So it looked like chores at home instead. However all this changed by  1 pm. The sun was out and things looked much better. So a small ride was in order and the best short motorbike ride around here is to Walhalla. Sat in the park there, with lots of other people and enjoyed a great coffee before taking a few photos and starting the ride home. Tried the bike out on some gravel road on the way back to Erica before riding home via Yallourn Nth. Short but definitely sweet.

Weather has been a bit variable lately and today it was changing from sunny to overcast every few minutes. During a sunny moment I donned all the riding gear with the intention of riding down to Tidal River on Wilsons Prom. Stopped for a coffee at the Bullock Dray in Mirboo Nth. and sitting there there was little sign of the sun and the wind had become quite gusty. At this stage I was a bit reluctant to head down the Prom thinking it would only get windier down there. So instead I pointed the Beemer towards Meenyian and rode along the South Gippsland Highway to Yarram making a lunch stop at the excellent Yarram bakery. After also buying a few goodies to take home, the return trip was back to Traralgon via Gormandale. The rain held off and altogether it was an enjoyable ride..

3 to 5 November - Ride to Wandiligong 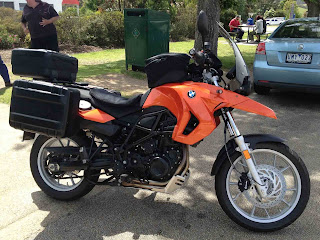 Saturday - With the promise of a few fine riding days I decided to ride over Mt Hotham to Wandiligong (near Bright) to visit family. This was my first trip with all the BMW luggage fitted including a handy tank bag. This was also an opportunity to try the Airhawk seat. All the gear worked very well and I'm very pleased with it.

The first stop of the day was the bakery in Bruthen for a coffee and a bun and a toilet stop. By then the temperature had risen to about 18 degC and while it was tempting to remove one layer of clothing I knew it would get rapidly colder on the way to Omeo. At Omeo it was time to stop for fuel as there is nothing available until you descend on the other side of Mt Hotham. There was still snow on the ground at Mt Hotham where I stopped for a few photos. I encountered plenty of people on bikes all taking advantage of the pleasant weather.

The ski lifts and slopes look quite forlorn without snow, but it is an opportunity for bush walkers to enjoy the area and there were plenty about. After a pleasant descent into Harrietville I arrived in Wandiligong around 3:30 after a great ride. After a very pleasant dinner with various family members at the Alpine Hotel in Bright, I was certainly ready for bed, but before we knew it we'd been chatting and it was 2am.

Sunday - started the day with a great breakfast at the River Deck Cafe in Bright. By then the sun was shining brightly and it seemed too good to pass up an opportunity to try the Beamer out on Mt Buffalo. The road up the mountain which has been in a bad state of late has been repaired and the ride up was fantastic.

Once again, plenty of people were taking advantage of the fine weather to catch the view from the top of Buffalo which is spectacular.

There is talk, finally of spending some money on the Mt Buffalo Chalet which is currently in a poor state of repair, after the hotel operators left the site as a result of some government bungling a few years ago. I understand the plan is to demolish a lot of the modern extensions to return the Chalet to something resembling its original shape and then to restore that to its former glory. 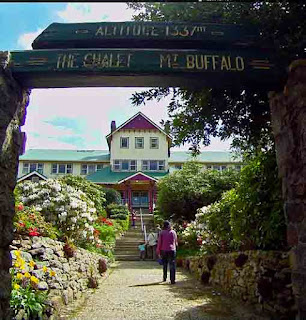 After a pleasant visit it was time to head back down the mountain to return for dinner in Wandiligong.

Monday - Left Wandi this morning at about 08:30 after saying goodbye to everyone. First stop was breakfast in Milawa and then commenced the trip home via King Valley and Mansfield. A quick stop in Alexandra for a cool drink and then down the Black Spur to Healesville which required a stop to top up the fuel on the Beamer. The weather was warm but overcast and rain looked likely, but as luck would have it the rain held off until I reached Traralgon at about 3:45 pm.

Altogether a great outing and fun catching up with everyone.