Port Albert is one of my regular rides and this afternoon, although somewhat wintery, seemed a good opportunity to continue my re-familiarisation with the Honda. 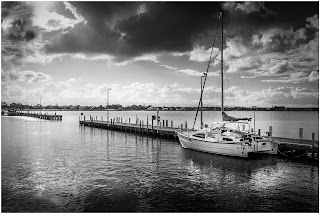 Port Albert, established in the 1840's is the oldest port in Victoria. These days it is a mecca for fisherman and a safe harbour for the occasional coastal traveller. Being a week day it was fairly quiet and the late afternoon light and the spectacular clouds made for some interesting photos.

Later in the afternoon the temperature was dropping quickly so time to head for home, after an invigorating ride.

Today, a day I thought would never come, and three months after being struck down by a careless driver, I had my first motorcycle ride - two rides in fact.
Following the surgery and the insertion of two stainless screws in my right tibia, recovery has progressed steadily and for the past six weeks ago I have been walking, initially with the aid of a walking stick, and although there are still some aches and pains, I thought today was the day.
Both bikes had to be jump started, not surprising after three months, and the tyres pumped up, but then it was time to get the Beemer out on the road for a 60km ride and a celebratory lunch and coffee. No problems there and when I got back the sun was still shining (temperature 11ºC) and so I took the Honda Shadow for a 50km ride in the opposite direction. In both cases it was encouraging to find the leg was fine and that I don't seem to have lost too much of my riding skills.
So, on reflection I have a lot to be thankful for. I turned 73 a couple of weeks ago and after a difficult few weeks I can still ride my bikes.
Posted by Theo van der Meulen at 3:39 PM 4 comments: