For some time now I've been checking the availability, performance and cost of action video cameras suitable for use on motorbike rides. Eventually decided on the Drift Innovations HD170. This little beauty shoots video and stills at full HD (1080), is waterproof to 0.5m and comes with a range of mounting options to suit all occasions. I ordered it on eBay and it arrived two days later. Took it out for a ride attached to the helmet - after fiddling around with the aligment for a while - and came back and anxiously played back about 40 minutes of video. I was truly amazed at the quality of the resultant video. Being mounted on the helmet made it feel like you are actually back on the bike. I was even more amazed when I realised I had left it on the lower quality (720) setting. Very pleased with the purchase. Some great video available on Youtube taken with this camera in a variety of settings including paragliding, skydiving, skiing and of course motorcycling.
Posted by Theo van der Meulen at 12:06 AM No comments: 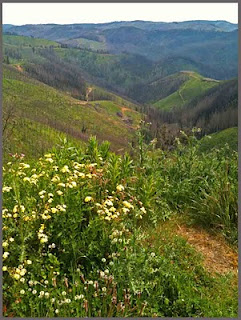 Finished work today and headed over the Strzeleckis to book a couple of camp sites at the Tarra Valley Caravan Park for next weekend. The afternoon weather was slightly overcast but very mild and perfect for a ride. The countryside around Mt Tassie is looking green and this is softening the stark effect of all the burnt bush and plantations. It was a pleasant surprise to find that the Lyrebird Cafe at Balook has finally reopened under new ownership. Just had an icecream today but I'll be trying out the a Devonshire Tea soon. Quick and very pleasant trip. 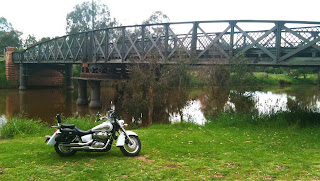 Looked like rain today but the radar said no, so time for a ride. Headed out to Longford via Gormandale and Stradbroke to have a look at the historic swing bridge near sale. This bridge turns on a central pivot to let boats pass from the Port of Sale to the Gippsland lakes. It was restored some time ago at a cost of $1,000,00. The main road now bypasses the bridge which is no longer open to traffic - well... cars anyway.

Made the return trip from Sale via Maffra, Heyfield, Cowarr and Toongabbie. 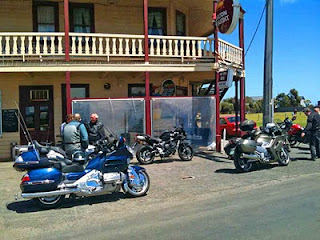 The first Saturday of the month and time for another 'fish and chips' run to Port Albert. Fairly small group today despite a beautiful day. Perhaps a few are recovering from the long weekend in Bright. Return trip via Tarraville and Woodside and finished the day with coffee at the Ice Creamery.

Finally the big day arrived - a four day ride to Bright and the surrounding areas. The bike had been packed for a few days, the tyres checked and fuel topped up. Left Traralgon at about 9:30 and rode to Bruthen via Maffra and Stratford. Very quiet on the road and at Bruthen it was time for coffee and fuel for the bike.

The road from Bruthen to Omeo is spectacular with great views and sweeping bends. The weather was sunny and mild until the climb towards Omeo. The temperature dropped quickly with altitude. A quick toilet stop at Omeo and caught up with a couple of Ulysses members making the same trip. Now for the most exiting part of the trip - the climb to the Alpine high plains via Dinner Plain and Hotham Heights. A bit of snow still around Hotham village and by now the temperature was down to about 5 degrees. Didn't hang around for long - everything seemed to be closed and started the long and winding road down to Harrietville where I stopped at Bella's for lunch. Enjoyed the best hamburger (with the lot) and a coffee. Down in the valley it was sunny and warm. 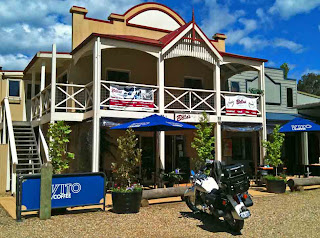 With all the recent rain Harrietville was spectacularly beautiful and it was a sheer pleasure riding the short distance to Bright. 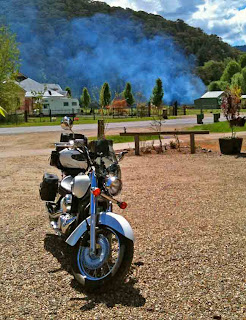 Arrived at John and Marie's in Wandiligong around 3:30pm after an absolutely an exhilerating day in the saddle. Really enjoyed a couple of beers around the open fire that afternoon!


Checked the weather forecast to find that Saturday was expected to be a washout with 60mm forecast for the day. Friday was still fine and it was important to make good use of it. The first ride was to Mount Buffalo. Following heavy rains the previous week the road was a bit rough with plenty of repairs in progress. 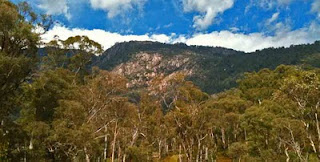 Almost no traffic and arrived at the Chalet to witness some terrific views of the valley below. 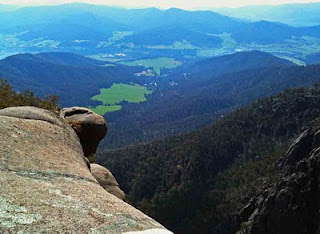 The poor old Chalet has not been occupied and is quickly falling into disrepair. It seems like an act of stupidity on the part of those responsible that this iconic facility will soon be beyond repair. Having stayed there a few times I feel sure with the right strategy and a significant investment this could once again be a major tourist attraction. Couldn't resist taking a picture of the Honda in front of the old lady. 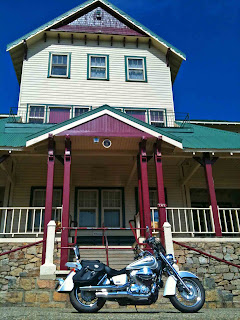 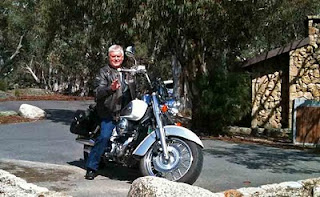 As there was no coffee, or anything else available on the mountain it was time to move on and so I headed of to Beechworth for lunch at the world famous Beechworth bakery. Luckily it was still fairly quiet as the long weekend influx of visitors had not yet arrived. After lunch I headed of to Mt Beauty along the Kiewa valley which is also a spectacular part of the world. 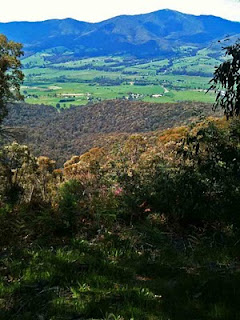 After a day filled with spectacular rides it was time to head back to the Wandiligong Holiday village for a few beers and dinner at the Wandi pub with my brother in law John. A nice way to end a great day.


The weather forecast was spot on. Woke to a drizzle of rain and by the time I had donned my riding gear to join the Ulysses group ride it was pouring and this continued all day. I don't mind a few showers but riding all day in the rain is not my idea of fun and I figured the club ride would be called off. As it turned out a few brave souls did venture out but that's another story. Spent the day inside with the family and decided to have dinner at the Star hotel in Bright with Marie and John, Peter and Maartje and my sister Lanie. We had a great meal and a fine time and the highlight of a very damp day. 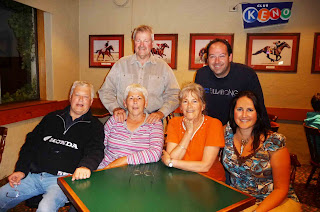 
This morning the rain had eased and the forecast expected all the gloom to clear. Joined the Ulysses friends at their caravan park in Bright and went on two club rides. The morning ride was a return to Mount Buffalo. The contrast with my own ride there on Friday was amazing. With Saturday's rain water was cascading down all over the mountain. A number of trees had fallen across the road and as we approached the top the mountain, it was shrouded in cloud and rain. On a fine day we had managed to find the only place where it was still cold and wet. A coffee at the cafe at Dingo Dell (only open on weekends) enable us to warm up a bit and dry the clothes. The afternoon ride was to Mt Beauty.


The weather looked reasonably clear and so I decided to head for home. Left after breakfast with John and Marie. The weather was fine and mild but as I approached Harrietville I could see that Hotham was shrouded in clouds. The trip up the mountain consisted mainly of efforts to avoid hundred of cyclists grinding their way up. About two thirds of the way to the top the fog closed in and by the time I reached Hotham Heights visibility was down to about 5m. If it wasn't for the orange lines on the side of the road it would have been extremely difficult to carry on. By the time I reached the top the temperature was down to zero and the possibility of ice started to play on my mind. By then the handgrip heaters were on full blast - an oasis of heat in cold, wet and white world. No choice but to carry on and start on the descent into Omeo. 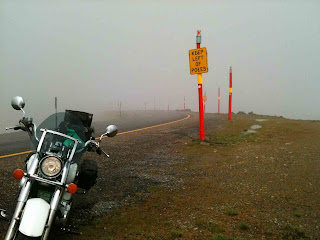 The descent seemed to take forever but eventually the air tempertature increased and occasionally I could see the green valleys below through rifts in the fog. Omeo was a welcome sight and it was time for a toilet, coffee and lunch stop. After sitting in the bakery at Omeo for about 30 minutes, the shivering stopped and it was time to head for home.

One more stop for petrol in Bruthen and then on to Traralgon, arriving at 3:30 pm.