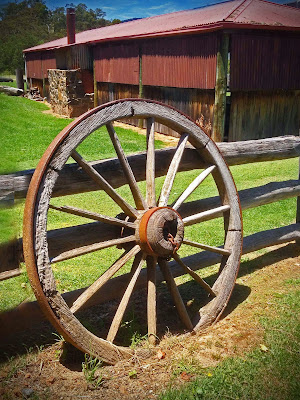 The small township of Dargo lies in the foothills of the Great Dividing Range and was established as a town around 1868. Initially it served as a stopover for gold miners travelling to the goldfields of Grant, Talbotville and Crooked River. These days, as well as producing timber the area is a popular recreational destination for the 'off road' crowd, bush walkers, deer hunters and fisherman.
The forecast today was for a 40ºC day and so Dargo seemed like a good destination for a run on the Honda. After morning coffee at the bakery in Maffra, it was a really enjoyable ride through Stratford and up the mountains into Dargo. Apart from one or two cars either coming from or going to Mt Hotham there was nobody around and given the heat it was very pleasant sitting in the general store enjoying a sandwich and a drink. After cooling down in the shade of a huge gum tree it was time to saddle up again for the return trip. By now it had got seriously hot and that meant a stop for an iced coffee at Wa De Lock in Stratford before riding the final leg back to Traralgon. A bit hot, but once again a great ride. 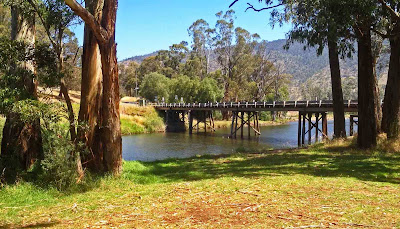 I had no plans for a ride today but just after lunch the sun emerged and there was no wind which seemed a perfect reason for a quick ride on the BMW. Hadn't been to Licola for a while. The ride to Licola runs through the foothills of the Great Dividing Range which makes for a spectacular and enjoyable motorbike ride. Being a week day both the road and the town were practically deserted. After stretching the legs for a while I wandered down to take a couple of photos of the bridge over the Macalister River (which feeds Glenmaggie Reservoir near Heyfield). 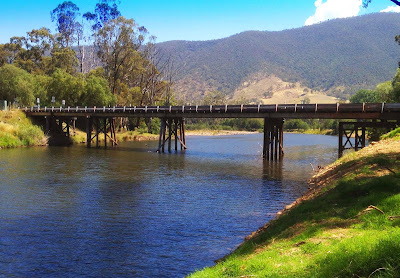 It was one of those days where riding on a great bike, through iconic Australian mountain scenery is just sheer pleasure. The BMW performed perfectly and there was no further sign of the problem with the oil pressure light - fingers crossed. 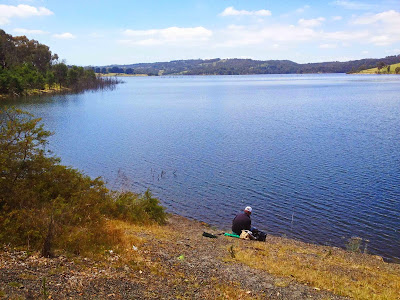 The Shadow Riders of Australia (SRA) (Victorian Division) held a Christmas BBQ lunch at Mt Sugarloaf Reservoir in Christmas Hills which is near Eltham. Fortunately the BOM promised a fine day so I took off on my Honda Shadow at 09:00 this morning. Wasn't sure how long it would take and so I stuck to the highway until Pakenham and then turned of through Cockatoo, Woori Yallock, Healesville and Yarra Glen.  Only took one wrong turn and arrived right on 12:00. 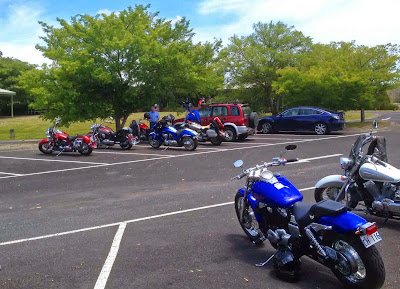 It was a great lunch and it was good to catch up with members I had already met when they rode down to Traralgon, and also some I hadn't met. The picnic area at Mt Sugarloaf Reservoir is outstanding - a beautiful setting and great facilities. 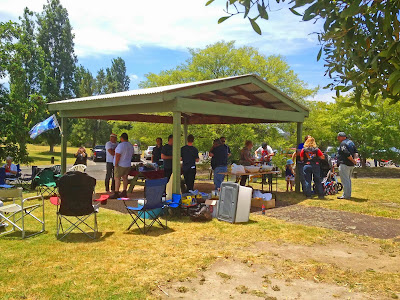 By 1:30 it was time to head home. By now the skies were clear and it promised to be a beautiful sunny ride home. The return trip was via Launching Place, Yarra Junction, Powelltown, Neerim and Yarragon. Altogether a great ride and a great day out.

Not long after I bought the Beemer, shortly after leaving Omeo on my way over the Alps to Bright,  the 'low oil pressure' light started flashing. I immediately turned the engine off and coasted back down into Omeo to investigate. Found everything to be OK and when I turned the ignition back on the fault had cleared. After calling Southbank BMW to discuss my options, it was agreed I could continue the trip provided oil level was normal (it was) and the light remained extinguished (it did). In discussing it with Southbank BMW and my local BMW dealer the only theory that emerged was a faulty oil pressure sensor. A few months of trouble free motoring ensued and I'd almost forgotten the incident when early this year, just prior to my ride to Maryborough Queensland, the same issue popped up again, and at my insistence the local BMW mechanic checked oil pressure (which was OK) and replaced the pressure sensor. Since that time, the bike had travelled almost 10,000 km without further incident and just as I was beginning to feel confident that we had indeed found and rectified the problem, the issue raised it's ugly head again last Friday just as I was riding along City Rd Melbourne, past Southbank BMW.  Once again, switching the ignition on and off cleared the problem but when I attended a book launch at Southbank BMW the next day I discussed it with Manny, the principal dealer. As this was Saturday afternoon and no service staff in attendance he immediately suggested I ring him this week and promised to investigate the issue whenever it was convenient do so.

I used the weekend to research the issue on line to see if anyone else had experienced the problem and found a useful discussion on this forum http://www.advrider.com/forums/showthread.php?t=626341

Unexpectedly, other F650GS owners had experienced the intermittent 'low oil pressure' warning and found it to be caused by the radiator cooling fan becoming seized due to the ingress of dirt, tar or just dirt. I immediately started the bike in the garage where, due to lack of forward motion I would expect the fan would operate as the bike reached operating temperature, and found that my fan was indeed not operating. A hefty nudge on the fan impeller failed to start it and it was indeed jammed.

I dropped the bike off at Southbank motors this morning and mentioned the fan issue and sure enough the fan was found to seized due to the ingress of some small stones. The bike's computer reported that it had indeed disabled the fan to protect the motor electrically. I have not yet gained a clear understanding of the link between this event and the "low oil pressure" warning but both the other riders on the forum and the BMW service guy confirmed that this is the sequence of events.

So, if any other F650GS riders are experiencing a similar issue, check the cooling fan on your bike, and if need be clear any material which may stop it from running.

My thanks to Manny and his team at Southbank BMW for the prompt attention and helpfulness.

My gratitude for getting to the bottom of this issue was soon dampened though, by a 160 km trip home through pouring rain. 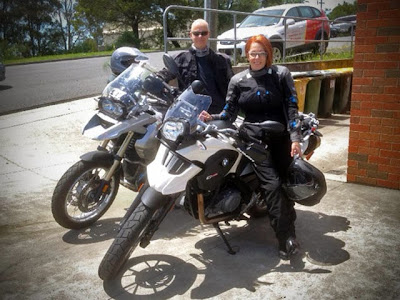 Rode to Melbourne on Friday in anticipation of attending the book launch of "Circle to Circle" held at Southbank BMW on Saturday. Spent the evening with my mate Marcus and his girlfriend Danielle. After a leisurely morning we took the short ride to Southbank where the normally sedate showroom was packed with people keen to hear the story of Brian and Shirley Rix. 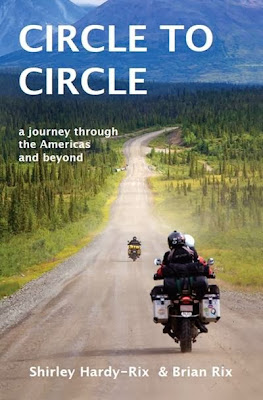 When Brian Rix retired after 36 years as a policeman in Victoria , he put his wife, journalist Shirley Hardy-Rix, on the back of his motorcycle and headed off for a ride. For the next 16 months Brian and Shirley rode more than 83,000 kilometres through 32 countries on five continents with side trips to Antarctica and Galapagos Islands.
They rode from the bottom of South America to the very top of North America. They rode over the Andes, sometimes more than 5,000 metres high. They rode through deserts, the tropics and up to Alaska. They had a catastrophic breakdown in the heart of bear country and suffered altitude sickness.

It was great to hear their story and to check out the BMW R1200GS they used for their travels, fully kitted out as it was on their journey. Even managed to get a copy of the book signed by the authors.
After the festivities were over it was time to battle the Melbourne traffic for our trip to Traralgon. Danielle passed her motorcycle learner permit and bought a brand new BMW G650GS earlier in the week and this was an opportunity for her to get a few kilometres on the open road under her belt.
So, our trio of BMW's headed east on the Princes Highway as far as Warragul and then turned off towards Neerim to pick up the road through Noojee, Hill End and Willow Grove. By then all clouds had cleared and we were riding through wonderful countryside in brilliant sunshine.
Spent the evening at our place in Traralgon with the aim of getting another ride in on the Sunday (today).
Today's ride took us to Korumburra, through Boolarra, Mirboo North and Leongatha where we stopped for refreshments and fuel. Eager for some more twisties on yet another brilliant day we then turned on to the Kormburra to Warragul road - a magnificent motorcycling experience. Left Marcus and Danielle to continue to Melbourne the long way (through Powelltown and Yarra Junction) and headed home via Yarragon etc.
Three great days on the BMW and some good times in between.

Posted by Theo van der Meulen at 10:39 PM No comments: