It's nearly the end of 2017 and a time to reflect on a difficult year from a motorcycle point of view.
Being struck by a car while walking in the town in March, and the resultant repairs to my tibia put an end to walking for some weeks and to riding for some months. On 1 July, three months after the accident I tentatively (jump) started both my bikes and took them for a short ride to recharge the batteries and to see if my leg was strong enough to hold the bikes up. Mainly due to an unusually wet winter it took a while to extend the rides to test my endurance and I've found that the Honda, being a cruiser, places less strain on the knee than the BMW. I've definitely found that, for me anyway, regular riding is needed to keep the skills and confidence at the required level and was glad to be able to fit in a few short to medium trips.

In recent weeks I rode to Warburton to stock up with baked goods from the excellent bakery there at the same time achieving one of my favourite mountain forest rides. Also managed a ride to Cowes on Philip Island with my son in law Zane a couple of weeks ago. Despite the many months of inactivity and some loss of muscle tone all went well and more importantly, I still found riding to be very enjoyable. 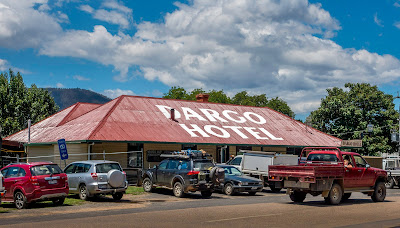 Today I undertook quite a long ride to Dargo, which is located in the foothills of the Australian Alps and the 'high country' made famous by the legendary cattlemen described in Australian classics such as 'The Man from Snowy River"

As it is summer holiday season here the town and surrounding area was packed with holiday makers camped along the Mitchell River and all coming into town for supplies. The famous Dargo hotel looked very busy and we steered clear, choosing instead the equally famous, and nearly as busy General Store.

I was joined on this ride by my brother Luke and my son in law Zane, and despite warnings of possible rain, for the most part we rode through this magnificent country in brilliant sunshine. It was only on the way back when we got close to home that the storm clouds gathered. Fortunately there was very little rain and I'm happy to report that I finished the year on a high with a magnificent year.