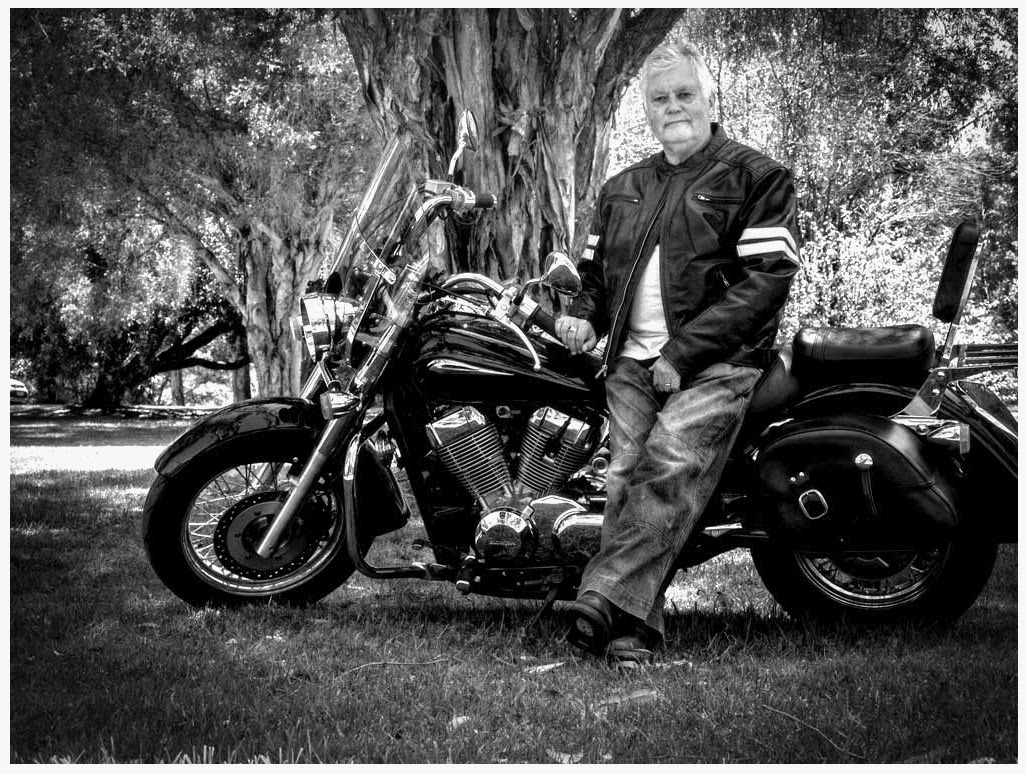 Finally a day with a reasonable weather forecast and an opportunity to try out a new motorcycle leather jacket the VikingCycle Bloodaxe Leather Jacket. Some weeks ago Motorcycle House sent me this very stylish jacket for evaluation and I've been dying to take if for a ride on a day with some variable weather. When I set out this morning it was overcast and cool and so I left the thermal lining in the jacket. The fit was perfect and as I rode off through the Strzelecki Hills I was grateful for the snug fit and the extra layer of comfort provided by the jacket. I rode to Port Albert and spotted a familiar motorcycle outside an attractive cafe there so I pulled in for an early lunch. The bike belonged to Russ Strobel who is the founder of Shadow Riders of Australia of which I am a member.
Russ was having lunch with his wife Lorraine and invited me to join them - a pleasant surprise and a great lunch.

After lunch it had warmed somewhat and I removed the inner liner of the jacket. After a very pleasant ride along the South Gippsland Highway I pulled over in a park to take some photos to show of the jacket. 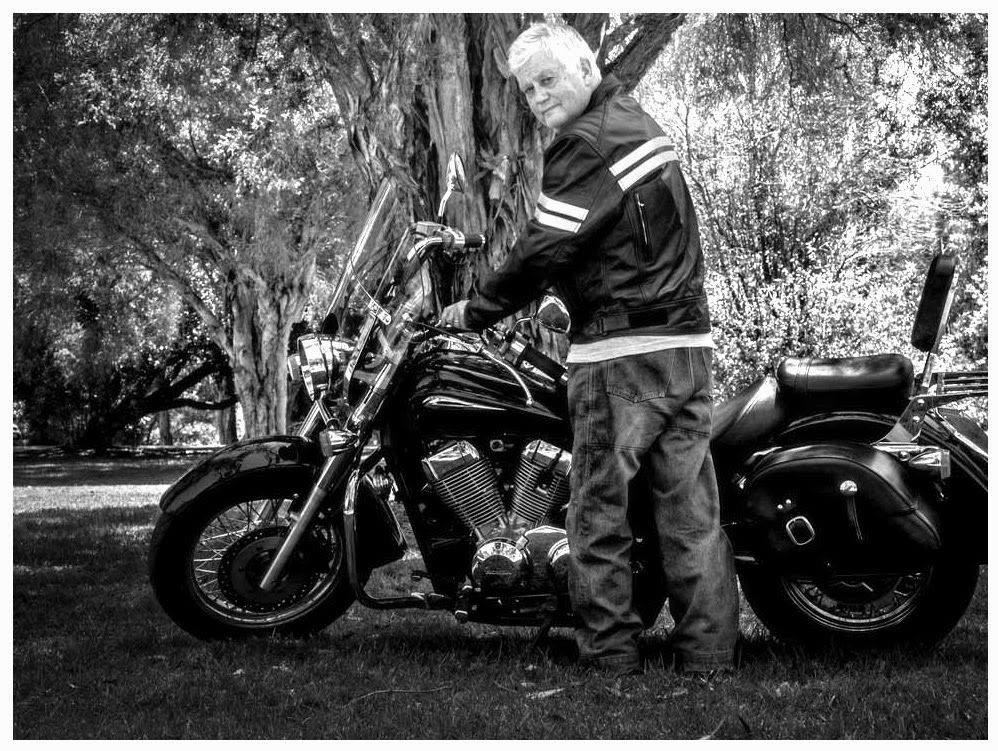 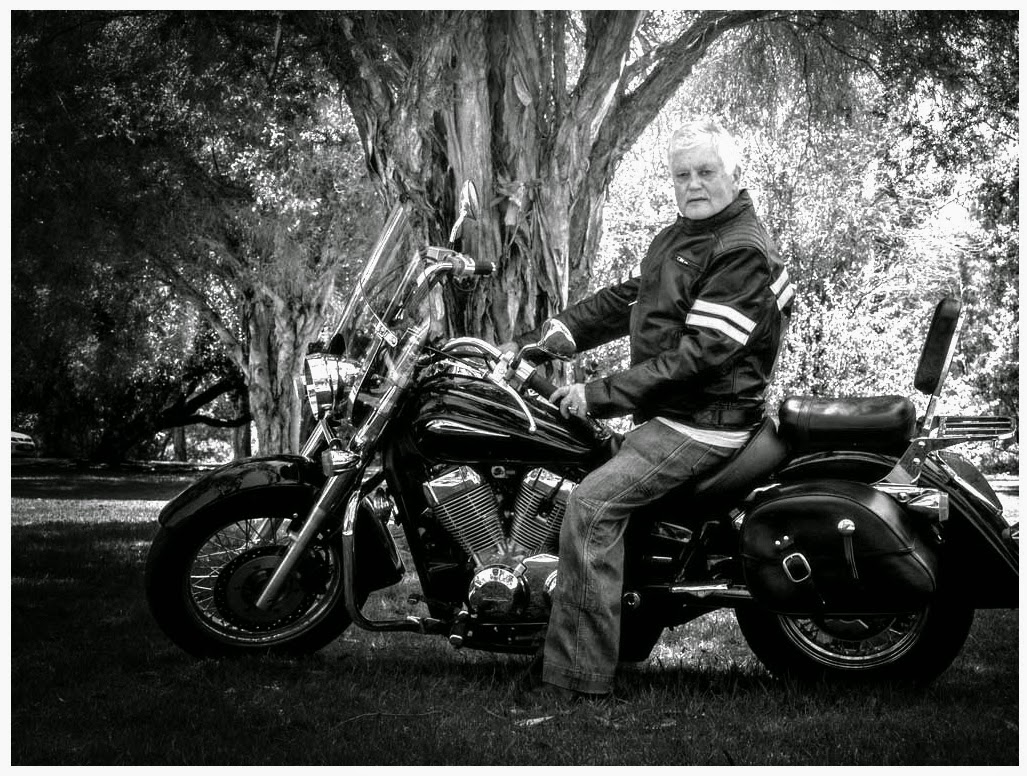 By then it had really got warm so it was time to open the various vents to get some airflow through the jacket. The rest of the ride home was delightful with just enough air through the jacket to keep things cool despite an ambient temperature approaching 30ºC.

So here is my assessment of the VikingCycle Jacket:

The jacket is made from a high grade, thick leather. As well as providing all the protection you expect from motorcycle apparel it also manages to look very stylish. The materials, the cut and the design all indicate great quality.

One thing I always check is the quality of the zippers. I've had to discard numerous garments over the years because they contained cheap plastic zippers which fail long before the garment is worn out. This jacket had very high quality metal zippers which will stand up to any treatment likely to be experienced on a motorcycle.

The removable liner (body and sleeves) provides that necessary additional layer for colder weather and I found the whole jacket to be very warm early in the day. In warmer weather, this liner can be removed which, together with the air vents built into the jacket ensures greater comfort at higher temperatures.

One feature I particularly like on this jacket are the stripes of reflective material on arms and on the back of the jacket. I think we need all the help we can get in terms of visibility and apart from the safety aspects I think the stripes give the jacket a distinctive look.

Like most motorcyclists I spend a bit of time looking at clothing in motorcycle shops and I'm always amazed how expensive good leather jackets usually are. If you check out the offering at Motorcycle House, you will be amazed, as I was at the value for money offered here.

Check out this jacket here

I hadn't planned to ride today, after a decent ride yesterday, but the Honda needed a run to charge the battery, and it was a mild, still day I decided to take a quick run into Walhalla, a little gold mining ghost town about 50km away. This is a short but very nice run along mountain roads through state forests. I stopped for a couple of photos of one of the Walhalla Goldfields Railway's loco's sitting at the Walhalla station. 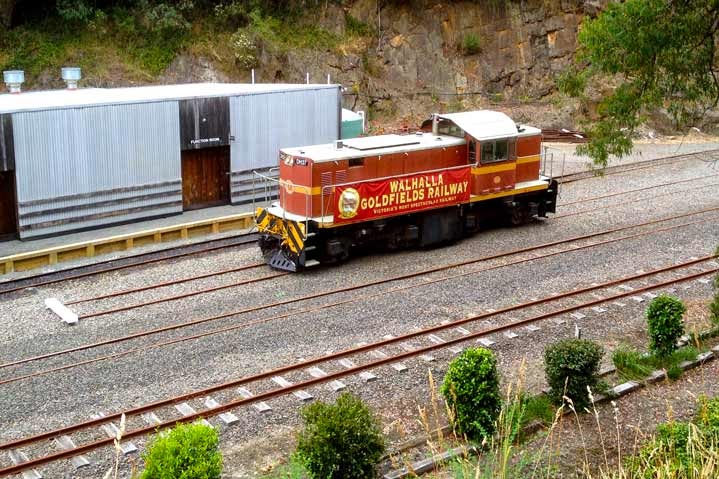 This railway which began construction in 1904 between Moe and Walhalla (via Erica) was built to support the mining operations in Walhalla, but unfortunately by the time construction was complete, mining had all but ceased and the Walhalla had started a steady decline in activity and population. The line fell into disuse and disrepair but in the early 90's a task force of volunteers managed to restore the bridges and line required to commence a regular tourist run between the Thomson River and Walhalla. This modern incarnation is incorporated as the Walhalla Goldfields Railway. 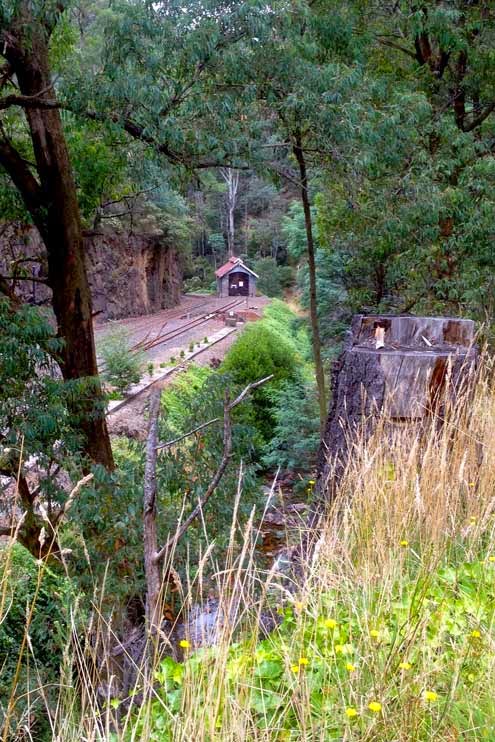 It is hoped that the funds can be raised to restore the line all the way back to Erica which would require a station and maintenance facilities to be established there.

Information about the railway and its history and current operation can found here.

Sometimes (not often in my case) weeks go by without a ride. I've just spent a pleasant couple of weeks caravanning in Cowes, Phillip Island but this meant no rides for quite a while. Then when we got home there's chores and inclement weather so today, despite warnings of a 37ºC day and afternoon storms, I rode to Warburton through the mountain/forest route. As usual it was the Warburton Bakery for lunch and coffee, before the return trip through Powelltown and Noojee. The afternoon storms didn't eventuate and altogether it was a pleasant days riding on the Beemer.