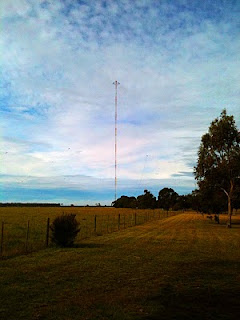 Mild and clear day today.  Rode to the Woodside Omega Transmitter which is a 432m high umbrella antenna and one of the eight transmitters installed worldwide as part of the Omega Navigation system which was the forerunner to the GPS satnav system. I remember all the fuss when it was being built in the 70's as people believed these transmitters would be nuclear targets in case of war. The system was finally decommissioned in 1997 (for further info on the Omega system see http://en.wikipedia.org/wiki/OMEGA_Navigation_System
The tower still stands a few km east of Woodside on the South Gippsland Highway and the transmission equipment is on display at the Port Albert Maritime Museum.
Returned via Yarram (lunch at the Bakery Cafe) and Tarra Valley. The mild weather and total lack of traffic made this a very enjoyable ride.
Total Distance 170km.
Posted by Theo van der Meulen at 3:51 PM