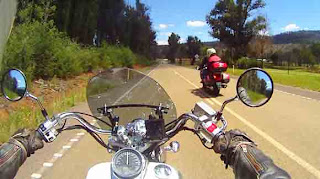 First ride with Ulysses Club this year. Left Traralgon at 09:30 and rode along the Princes Highway to Yarragon. Then a right turn into the hills with a whistle stop at Powelltown. The weather started cool and overcast but by mid morning it was blue skies and warming up rapidly. Beautiful ride through the hills to Warburton and then along the Reefton Spur. Enough twisties to keep anyone happy. Arrived at Marysville by 1 pm. It is less than two years since this town was almost totally destroyed by bushfire, but today it was one of the busiest places I've ever visited. Rebuilding is well underway and there were cars and motorcycles everywhere. The famous bakery was one of the few buildings not destroyed, and it was busier than ever. Eventually managed to buy a ham and salad roll and find a shady tree to eat in under. An hour later it was back in the saddle for the return trip down the Black Spur. A petrol stop at Healesville and then home via Woori Yallock and Pakenham. A final get together for coffee at Yarragon was the end of the official ride. From here an easy cruise back to Traralgon along the back roads ended a very enjoyable ride and a great day.