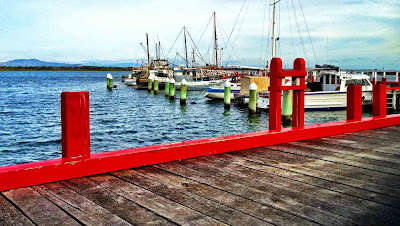 Here in Gippsland, at this time of the year, when the weather forecast predicts "Sunny" it does not mean "warm and sunny". In fact this morning it meant "bloody cold and sunny". The Beemer told me it was 7ºC when I set off this morning, and if it wasn't for plenty of warm gear, including a neck warmer, riding would not be a lot of fun. On the other hand, if you're properly prepared with thermals and double socks it's fine and by the time I stopped for fuel in Mirboo North the temperature had risen to 11ºC - wow!

My ride today took me the long way (via Inverloch) to Port Welshpool which is on the South Gippsland Highway. Port Welshpool, a small fishing village, was for some years (mid 1990's I think) a terminal for the infamous high speed SeaCat Tasmania, which provided a high speed link between Victoria and Tasmania.

Unfortunately this service ran into a lot of problems mainly due to the rough conditions which prevail in Bass Strait. In rough weather the ride was very uncomfortable and the SeaCat soon earned the nickname SpewCat. Additionally there was a range of structural problems which I think affected the engine mounts. After a couple of seasons the service was discontinued and after repairs the SeaCat sailed to the UK (via the Panama Canal) and is now in service as a ferry between Dover and Calais.

I never got to see the SeaCat in action because at the time it operated I lived in Melbourne but I was interested to see if there was any sign of its operation in Port Welshpool. The only thing I found was that the terminal building is still there, looking very forlorn at the end of the jetty. According to a sign it is available for hire for corporate functions. Continued the ride home via Yarram without further stops.