Spring is well underway and all of a sudden our trees have sprung blossoms and started growing the next lot of leaves which we'll spend all of next winter cleaning up. In the nearby Dandenongs, a range of hills to the East of Melbourne, it's tulip time. For the past 62 years, the Tesselaar family, who like my parents were part of the Dutch post war migration boom, have hosted a tulip festival on their farm located in Silvan, in the Dandenongs. 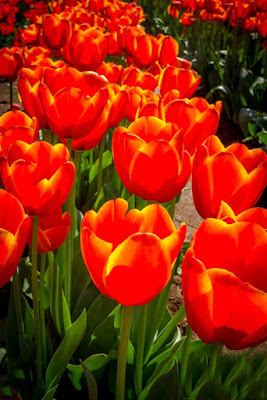 Over the years, what was originally a farm visit has now turned into a full blown cultural festival occurring over a few weeks featuring as well as lots of tulips of course, Dutch delicacies, live music, folk dancing etc. A great family day out, and today it co-incided with one of the few sunny, mild days on the horizon, so I took the Shadow for a lovely meander through the hills to see the tulips. 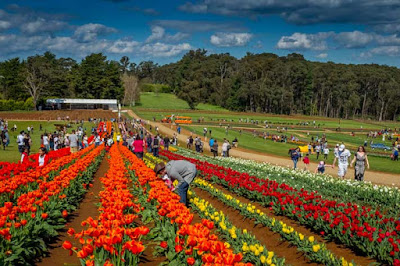 Quite a few thousand other people had the same idea and one of the advantages of going by bike became immediately clear - no issue with parking!
The atmosphere was fantastic. A locally manufactured street organ was belting out the well know fairground tunes and the smell of poffertjes, german sausages and espresso coffee was everywhere - what's not to like. After attending this event sporadically over a few decades, I was fascinated to see that the festival appeals to such a diverse group of people, young, old and originating from every part of the world. Everywhere, people were squatting between the dazzling tulips to have their photos taken and the number of 'selfie' sticks rivalled the number of tulips. 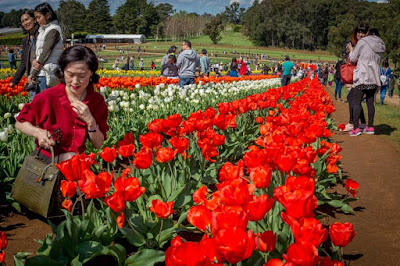 The range of colours on display is really astounding and the overall effect is quite stunning. 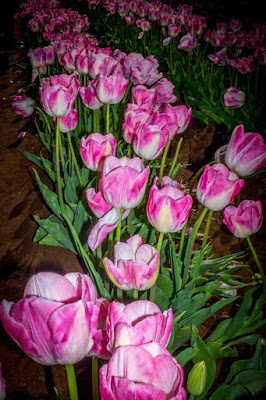 In every direction there were parents trying to get their little ones to pose with the pretty flowers, some with more success than others. 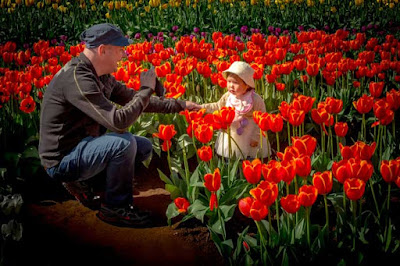 The return trip was via Yarra Junction, Powelltown and Neerim South and the weather held out all the way. A great day out.

The Beemer had it's 36,000 km service on Wednesday. It's supposed to be serviced every 10,000 km but in this case the instrument panel insisted that too much time had elapsed since the last service and in the end I relented. I'm in two minds about this time based aspect of servicing, and I probably would have let it go until I reached 40,000 km but I've found that in the past 12 months I've had to adjust the chain 3 or 4 times, indicating it is stretching, and I really wanted a professional advice on whether to replace it or not. Some owners on the Web report changing chain and sprockets after only 20,000 km and some of the published photos lead me to think that those bikes have a much harder life than mine. Looking at my sprockets I can't see much in the way of wear, but the verdict from the BMW service tech was that I should replace the whole chain set, so I'm getting a few quotes on that.