Woke up this morning and immediately checked the weather forecast and rain radar for Hahndorf our next destination. Lots of rain coming through and flood warnings for the Adelaide Hills. However the forecast also indicated that these conditions would ease during the day. So we went back to bed for a while and eventually left Mildura at around 9:45. Conditions around Mildura were clear but very windy, and the trip to Renmark was all into a strong headwind. We were glad to get into Renmark and filled the tanks and the tummies. Coffee and pastry at a very busy patisserie revived us a bit. A further check of the weather radar showed that we would encounter some rain so it was time to don the wet weather gear. Sure enough, ten km into the next leg and the sky got very dark and the rain started. For fifteen minutes or so we ploughed on through steady rain and the strongest wind I've ridden in, quite a combination. Then, as suddenly as it had started the rain petered out and a few minutes later we were riding under clear blue sky, it seems that we had just ridden through the very edge of a storm system which had passed through Adelaide. The strong wind persisted though and the rest of the trip became one of the toughest riding days I have experienced.
Finally, after a very tiring day we arrived in Hahndorf to the news that a major flood had gone through the town but had fortunately cleared. If we had arrived an hour earlier we would not have been able to get to our hotel as the bridge leading to the rooms was under water. Great timing as all that had abated when we arrived. It was with some relief we checked into our room at the Hahndorf Inn Motor Lodge. 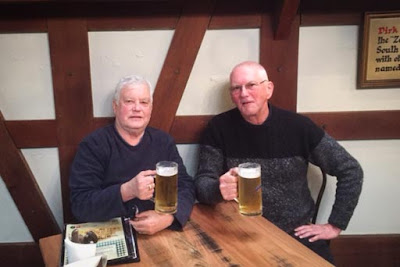 After recovering for a couple of hours it was time for German beers at the Hahndorf Inn and to start thinking about dinner. Having dined here previously I was looking forward to the German cuisine and in the end we settled for a shared Wurst Platter. 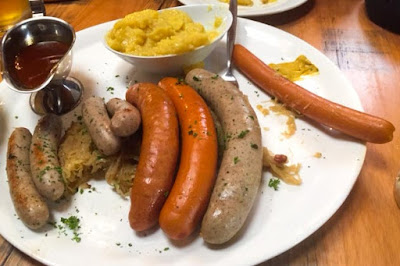 German sausages, sauerkraut and potato salad certainly hit the spot. All that was left was a quick walk around the town before settling into our cosy rooms. The weather forecast for tomorrow looks good and as we are here for at least two nights we will organise a ride in the Adelaide Hills.