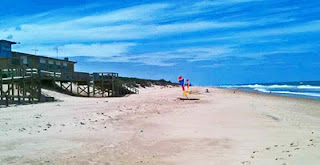 When we were kids, our parents often took us swimming to Golden Beach and Seaspray. My recollections were that there was almost nothing there except the 90 mile beach. Years later on a family outing with the family Rosa almost drowned after being swept away by the infamous rip at Golden Beach, and that was my last visit to this area. This was around 1964. I decided to ride there today to check out the area. As expected, it was unrecognizable. Lots of houses have been built in the intervening years, and Seaspray has a pleasant looking caravan park and an extensive Surf Life Saving Club. The road there and back was almost deserted and even though the short cut from Stradbroke featured 11 kms of unmade road, it was no problem and followed the Bass Link transmission line for some distance. Altogether a very pleasant ride.