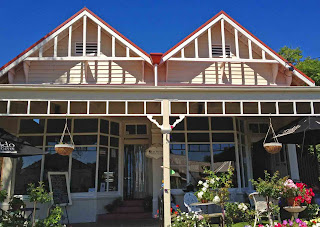 A cool and overcast morning, but the bureau had forecast clearing fog and a hot sunny day. Rode off on the Honda this morning at about 10:00 towards Mirboo Nth, Leongatha and Korrmumburra with the intention of having lunch in the little village of Loch. This is a tiny historic town on the South Gippsland Highway renowned for its antique shops, cafes and restaurants. Could have picked from a number of attractive cafes but the one that caught my eye was called "La Rosa" - how could I go wrong.

Had a terrific lunch and a great coffee and a nice chat with some of the locals. Continued on my way to San Remo and Philip Island and realised something was up - there were motorbikes everywhere - it wasn't until I approached San Remo that I saw the signs advertising this weekend's Superbike races that I realised what all the bikes were doing there. Stopped off at Biker's Gear in Cowes and bought a terrific pair of leather riding boots at a bargain price. The return trip was through Wonthaggi, Cape Patterson, Inverloch, Leongatha and Korrumburra where I took a coffee break at the "Bullock Dray" cafe - a favourite. Got home at 4:30 pm after a fantastic day out.