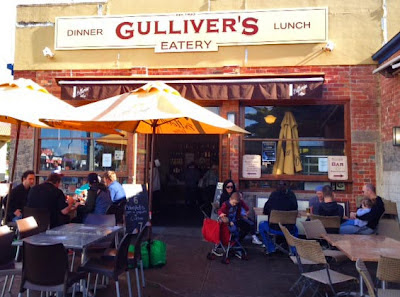 Rode to Cowes with Zane today. Our route took us over the Strzeleckis via Ellinbank and Korumburra where we stopped to top up the tank on Zane's Kawasaki. Then through the beautiful Sth Gippsland countryside to the Bass Highway via Kongwak. We left Traralgon in sunshine but by the time we crossed the hills the clouds were down at road level. A very eerie sensation riding along a really windy road through fog. Finally, about 5km out of Korumburra the fog cleared and we could see black clouds to the south but signs of blue sky in the direction of Phillip Island. By the time we reached San Remo, the sun was shining and in Cowes you would have thought it was a summer day. Had lunch at Gulliver's Eatery in front of an open fire which was very pleasant. After our rest in front of the fire we were off again to take the coastal drive between Cape Patterson and Inverloch - great views and the weather was still holding out. Eventually after another fuel stop in Inverloch it was time to head for home via Leongatha, Mirboo Nth, Boolarra and Churchill. Another pleasant day out on the bike. I've just passed the 9000 km mark on the Beemer so it will be due for a service soon.