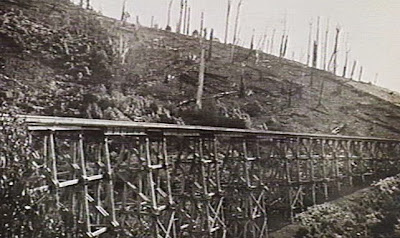 The BOM promised a fine warm day so the plan was to ride to Warburton for lunch via Noojee and Powelltown. The roads were quiet despite the public holiday and the first stop was Noojee to take another look at the old trestle railway bridge just outside the town.

This bridge was part of a series of bridges (this bridge is No. 7) which supported a railway line which connected to the Gippsland line at Warragul, and eventually reached Noojee in 1919. This line was used to carry timber and passengers. At the time there were 28 sawmills in the area, and over 200 km of narrow gauge line connecting the mills to this railway line. In those days, freight trains were limited to a maximum speed of only 40 mph, and as a result the 143 km ride from Flinders St Melbourne to Noojee took 6 hours. The line was ravaged by the 1939 bush fires, but rebuilt.  In the end though, the arrival of roads into the area spelt the end of the line. Progressive closure of the Warragul to Noojee railway line occurred between 1954 and 1958. 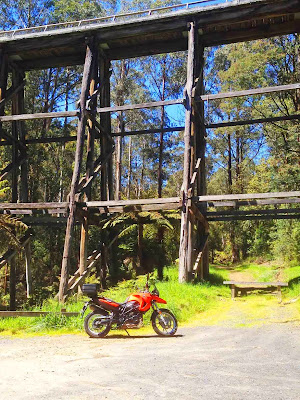 When the railway line was dismantled the Buln Buln shire purchased the No. 7 bridge and today it is well maintained and part of a walking and rail trail. In 2010 the bridge hosted the local version of The World's Longest Lunch, with tables set up all the way across the bridge.

After visiting the bridge again it was on to Warburton for lunch at Three Sugars,  then home through Powelltown, Neerim South and Yallourn North.