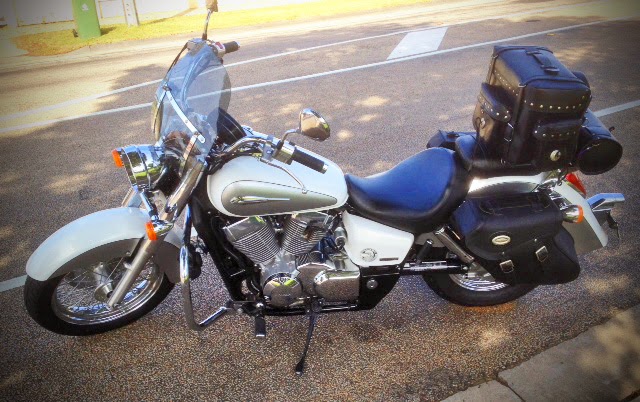 As the proud owner of a Honda Shadow I am a member of the Shadow Riders of Australia (SRA).
This is an Australia wide group of people who own and ride Honda Shadows. There is a link to the web site on this page and also here.

This year SRA held its Annual General Meeting (AGM) in Bright, Victoria and around 40 or so Shadows and their riders and pillions all showed up for the weekend.

Had the bike all packed and ready to go early in the week and at 08:30 I was raring to go for the 350 km trip to Bright through Omeo, Mt Hotham and Harrietville. It was a perfect day for a ride and after a quick lunch break at the Bruthen Bakery, it was time to head into the Australian Alps. The ride up the Great Alpine Road was absolutely breathtaking and I was almost reluctant to start the descent into the Ovens Valley.
As most members were not meeting until Friday evening (BBQ) I took advantage of a beautiful Friday to ride to Wangaratta, Beechworth and had lunch in Yackandandah which must be one of the most beautiful little towns in Australia.

Friday night was time to meet and greet and to put faces to all the people we've got to know via the SRA Forum site.

Saturday morning the group met for breakfast (bacon and eggs) and assembled for a ride to nearby Harrietville where the AGM was being held in the Harrietville Hotel. Assembling all those bikes and people for an orderly group ride is quite a task and at one stage while resting on my bike I must have dozed off. One of my fellow riders captured the moment. 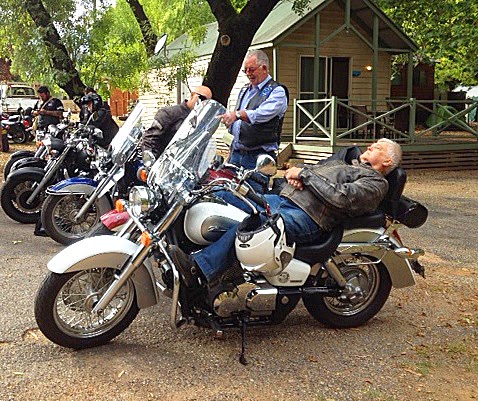 (Thanks Corky for the photo)

While parked at the Harrietville pub, my bike was parked next to it's twin. The other bike belongs to Brenda who rode down from Dubbo.

Brenda has made some nice mods to her bike, including a very comfortable looking seat, a headlight upgrade and driving lights. There is a link to her blog - The White Shadow Diary - on this blog or you can also click here.

At about 4 pm on Saturday during a conversation with a fellow rider Steve, I discovered he had not heard of or ever visited Mt Buffalo. In no time we were on our bikes heading up the mountain. Had a fantastic ride and back in time for dinner.
The festivities on Saturday ended with an evening meal at the Star Hotel in Bright.

On Sunday the plan was for a 200 km Poker Run, destinations unknown. During Saturday night I woke a couple of times to the sound of pouring rain - not good! By Sunday morning however the rain had disappeared but the sky was cloudy - glad I packed my wet weather gear.  With all the bikes lined up for a 10:00 o'clock photoshoot, and a drawing of the first poker card, we got underway around 10:30. 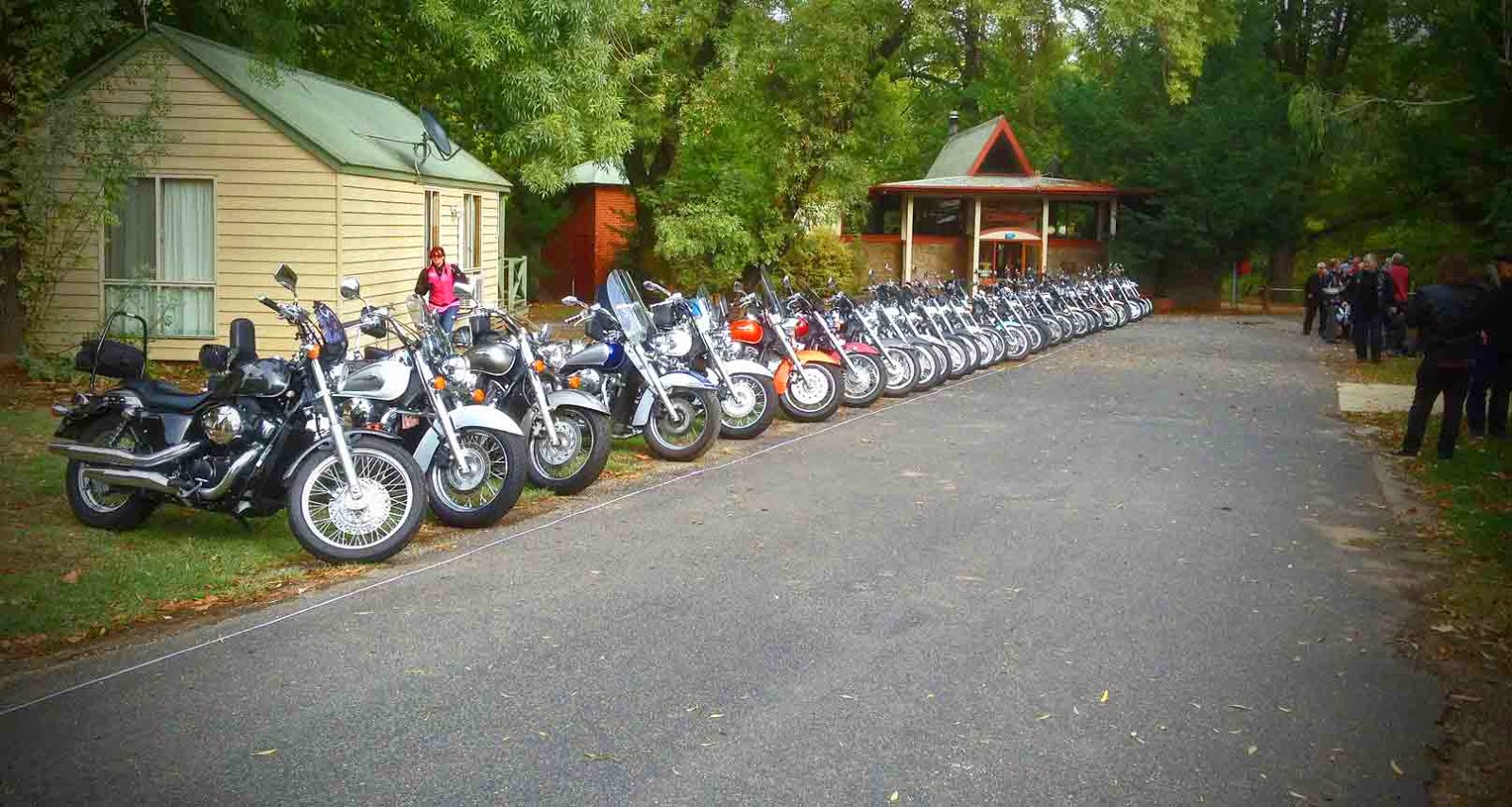 It was an incredible sight travelling in a convoy of 39 motorcycles (in stagger formation) all heading down the Great Alpine Road. The route took us up the Towonga Gap where the second card was drawn at a look-out over Mt Beauty. From there we travelled through Dedderang with our next card draw (and toilet stop) in Yackandandah. The fourth card draw was at lunchtime in Beechworth with the final draw back in Bright. My cards were absolutely rubbish but I really enjoyed the ride.
The weather held out with only minor spits along the way. Everyone returned safely and a good time was had by all. 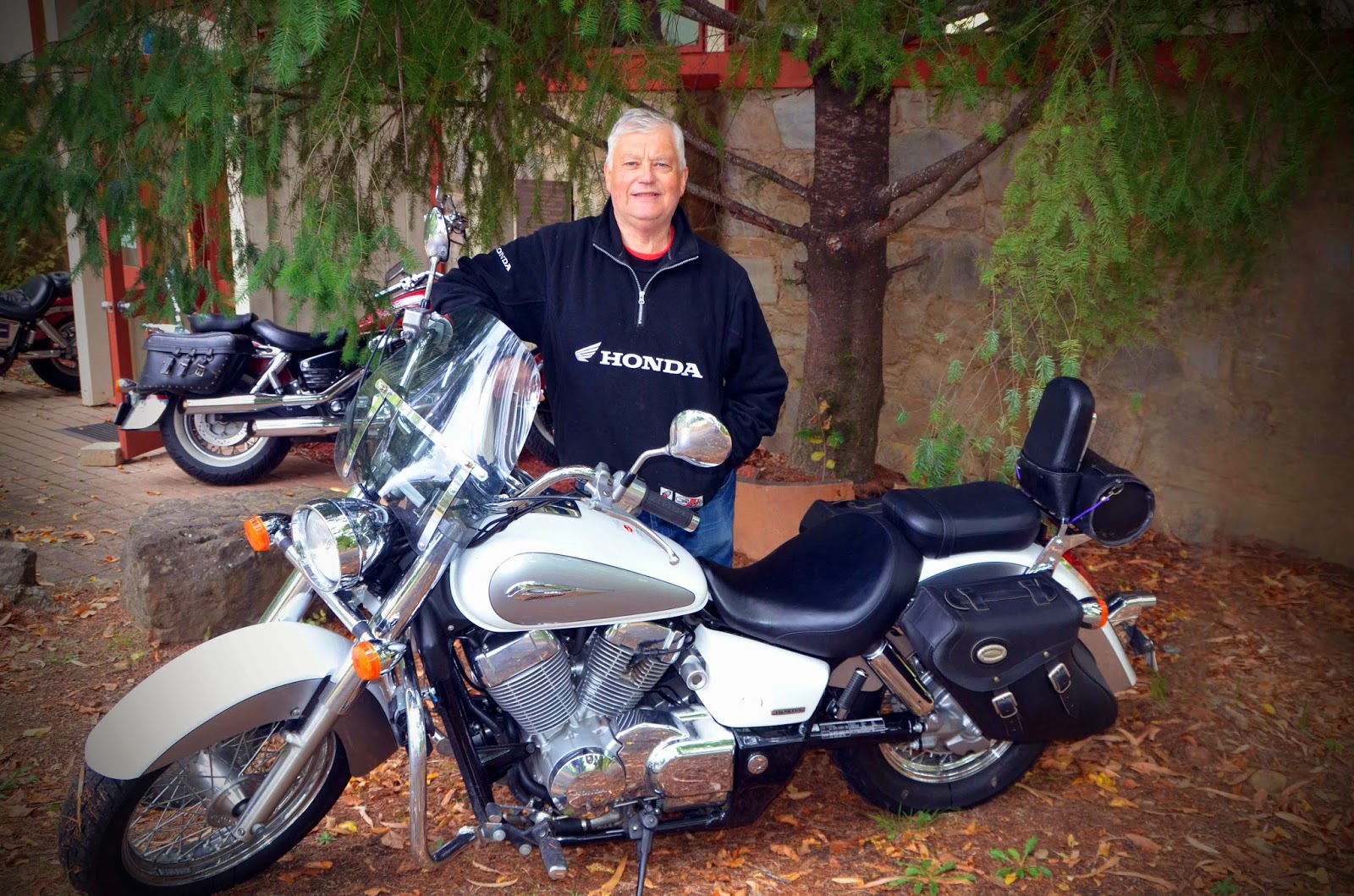 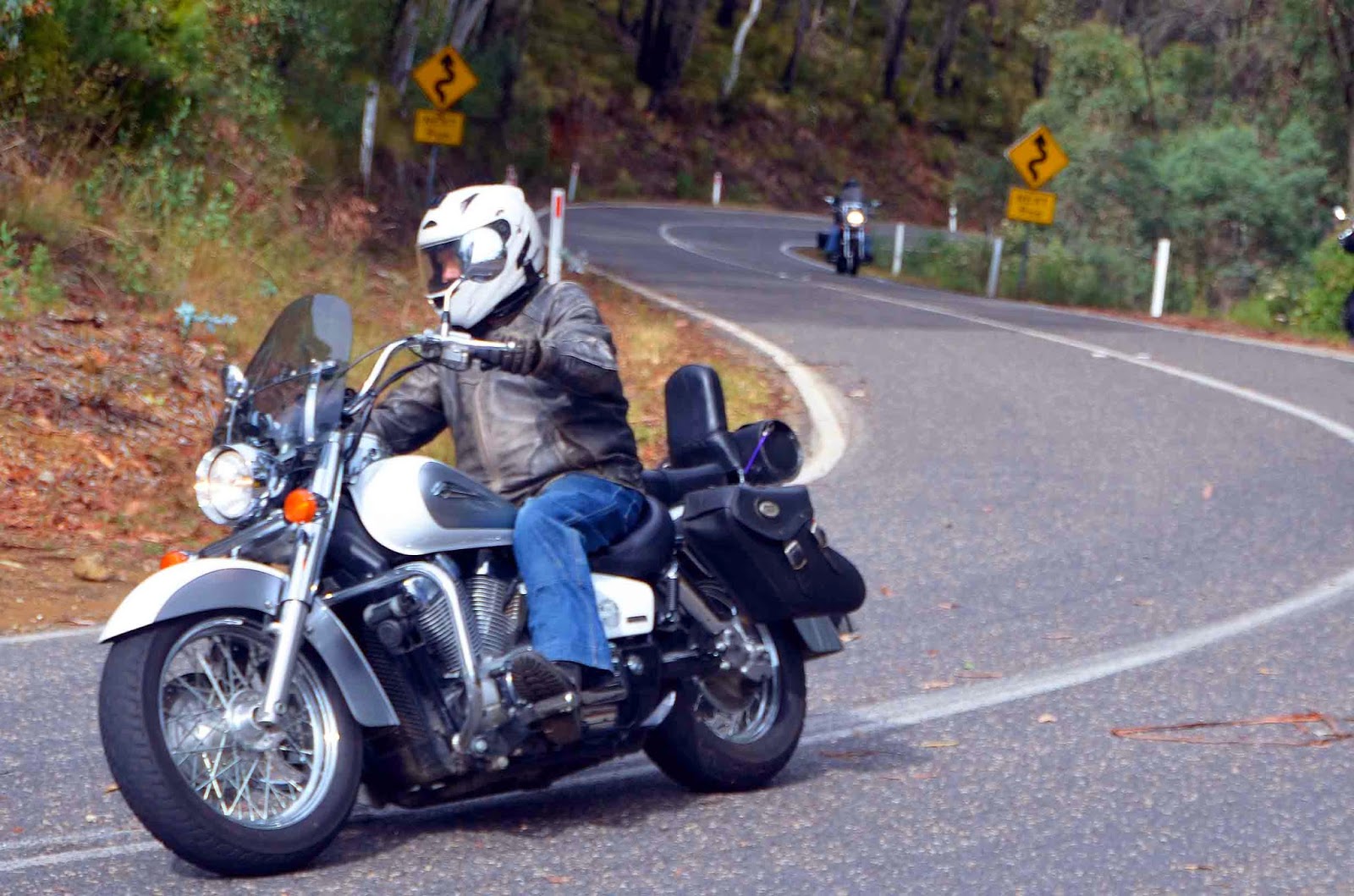 (Thanks Casper for the photos)

As most people were heading home on Monday, Sunday night was a time for goodbyes. It is amazing to spend a weekend with fellow Shadow riders who came from all over to simply spend time together and to ride motorcycles together. Riders attended from as far away as Queensland, NSW and South Australia as well as us Victorians of course.Next year's AGM will be held in Queensland.

I started my return trip on Monday morning. A quick look at the mountains behind Bright showed that the cloud level was well below Mt Hotham and a return trip over the mountains while shorter (350km)  would be through fog and therefore cold and wet. Took the alternative route home via Whitfield, Mansfield, and Alexandra. After avoiding the fog over Mt Hotham I encountered  quite a bit of it between Whitfield and Mansfield - down to 45 kph in a lot of places. After a welcome lunch break in Alexandra the rest of the trip was through Marysville and Warburton. Once again the winding road down the Reefton Spur was covered in fog and the roads were wet. Quite a surreal feeling riding through these massive forests covered in fog. One bonus on this stretch was that I saw seven lyrebirds - a rare sight - at one time in a group of three.

It was certainly a wonderful adventure - it's hard to imagine anything other than motorcycling to deliver such a sense of achievement and sheer joy.