Today was another one of those days when the road beckons. It was sunny, warm and almost no wind so I took the Shadow for a ride with the original intention of going to Tidal River on Wilsons Prom. However by the time I reached Meeniyan I changed my mind and decided to have lunch at Bromleys in Foster instead. As I left fairly late, the return trip form Tidal River would have been a bit late. I never tire of this particular trip, over the Strzelecki's and then a lazy cruise along the South Gippsland Highway with hardly any traffic - an advantage of riding during the week. With a bit of time up my sleeve I decided to make the return trip via the Tara Valley/Bulga Park road and with the good weather linger this was a really enjoyable ride until I got to the Grand Ridge Road. That's when I hit long patches of recently repaired and unsealed road with quite a soft surface. OK, no real problem even on the cruiser, just maintain a steady (and slow) speed and watch out for the soft bits. All was going well until I came around a corner and was faced with this. 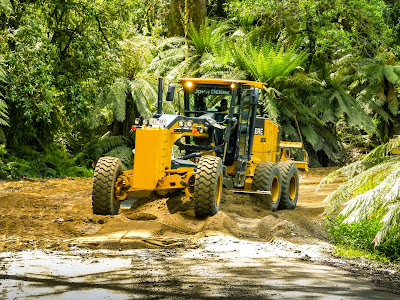 Yep, a road crew had just dumped tons of dirt and were in the process of grading and compacting it. The guy with the Stop sign thought it might be 10 to 15 minutes, so I parked the bike, switched off and got comfortable. Soon I was joined by other traffic including a huge timber jinker. 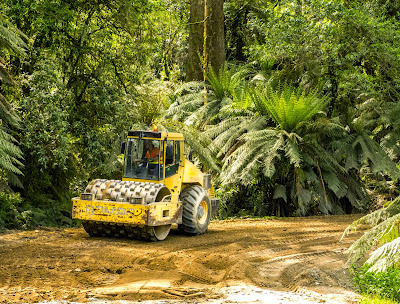 Just as well I was not in a great hurry because for the next 40 minutes or so a collection of rollers, graders and watering truck proceed to turn the piles of dirt into a road - well sort of.
Eventually we were able to continue on our way on the wrong side of the road with the assurance that nothing would be coming the other way. The rest of the ride was uneventful and enjoyable.