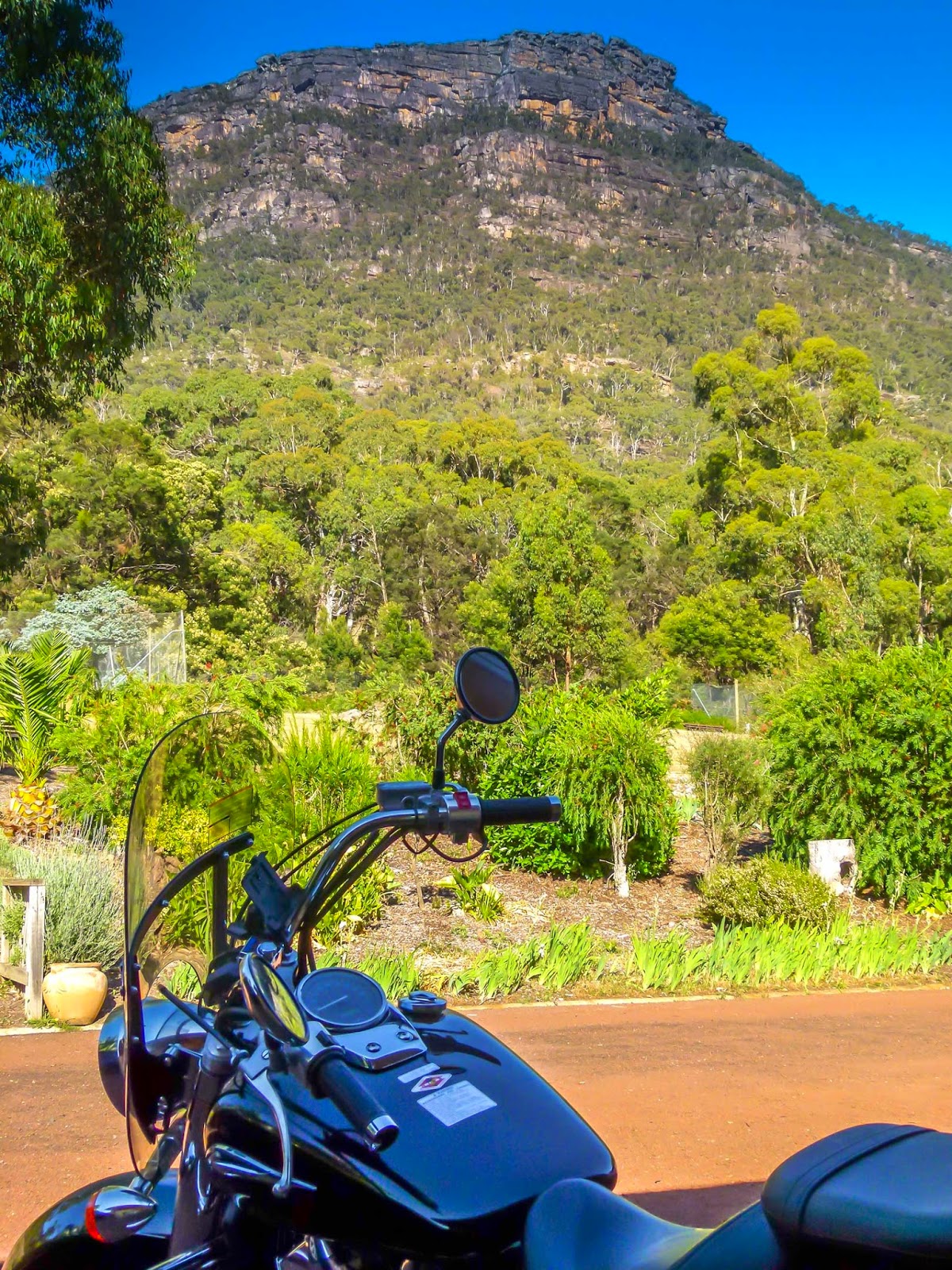 Shadow Riders Australia (SRA see link above) is an owners group for Honda Shadow Owners with hundreds of members around Australia.
A couple of our members based in Horsham arranged a weekend event to take place in the Grampians, a mountainous and spectacular part of Victoria located some 250 km West of Melbourne.
I joined up with a couple of Melbourne members early on Saturday afternoon and we then assembled with a larger group on the Western Highway and after a brief catchup and chat the group roared down the freeway headed for Halls Gap in the Grampians. Took a coffee stop in Beaufort and a necessary fuel stop in Ararat where we left the highway and headed for the hills. When we reached the Grampians Motel (picture above was the view from my room) we were joined by other members from as far afield as Albury - a six hour ride away. The afternoon was spent putting a serious dent into a cooler full of ice-cold drinks and this was followed by a really good dinner at the motel restaurant. The menu, service and the food was excellent and if the volume of the conversation was anything to go by a good time was had by all. As the end of dinner approached the motel proprietor lit a huge bonfire on the front lawn and the festivities continued around this huge fire.

At 9:30 the next morning, after a great breakfast it was time to head off on a scenic ride of the Grampians, led by our local members Mutley and Corky. What a ride it was - the Grampians feature a number of spectacular lookouts which provide fantastic views of the surrounding countryside. 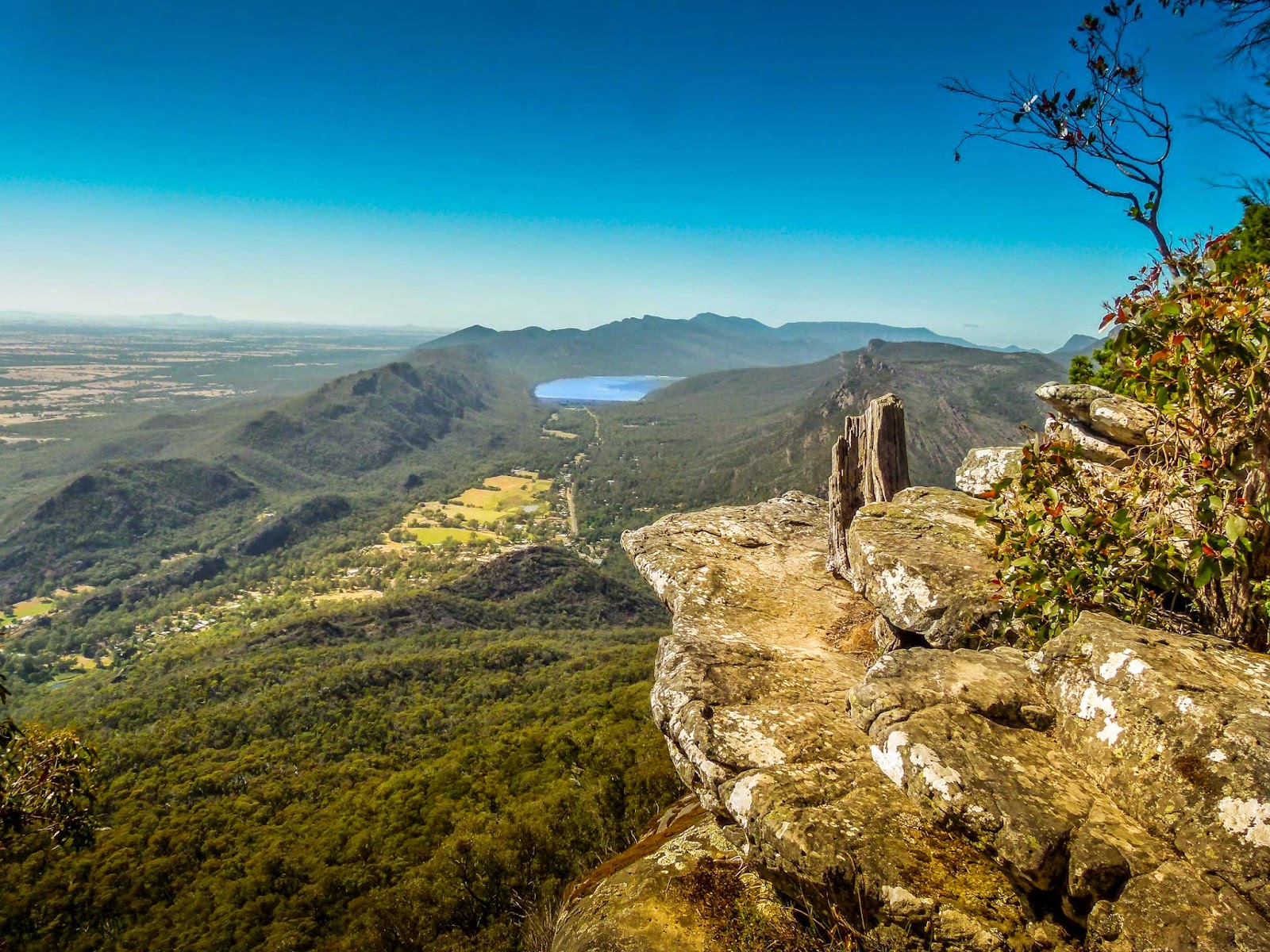 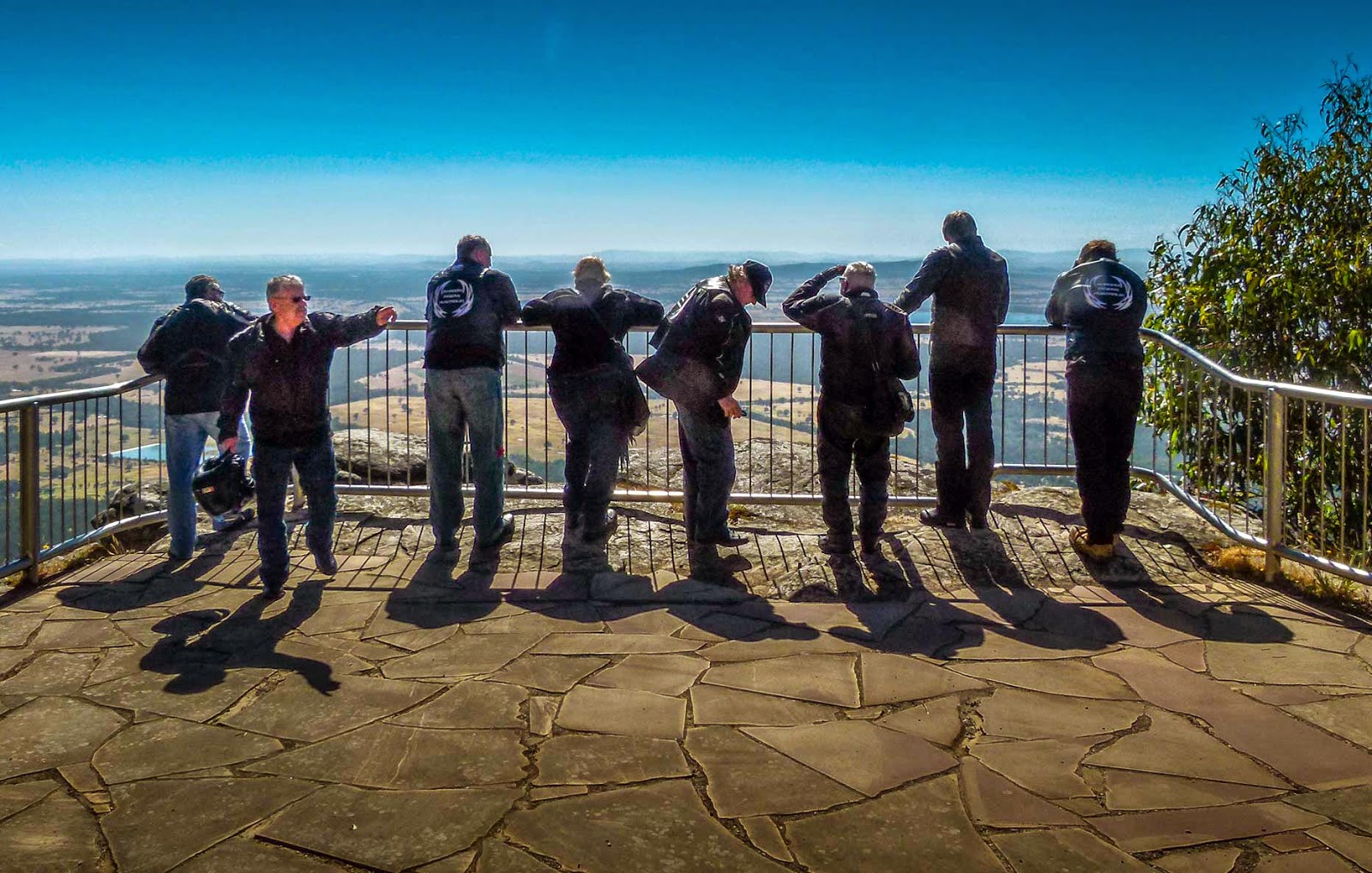 Despite ample evidence of destruction caused by fairly recent bushfires our ride was spectacular and over all too soon as we rolled into a local hotel for lunch. After lunch our hosts led us on another spectacular ride to Dunkeld a small town south of Halls Gap. Here we enjoyed afternoon tea/coffee in an outstanding bakery/cafe, for a bit of a top up before the long ride home. 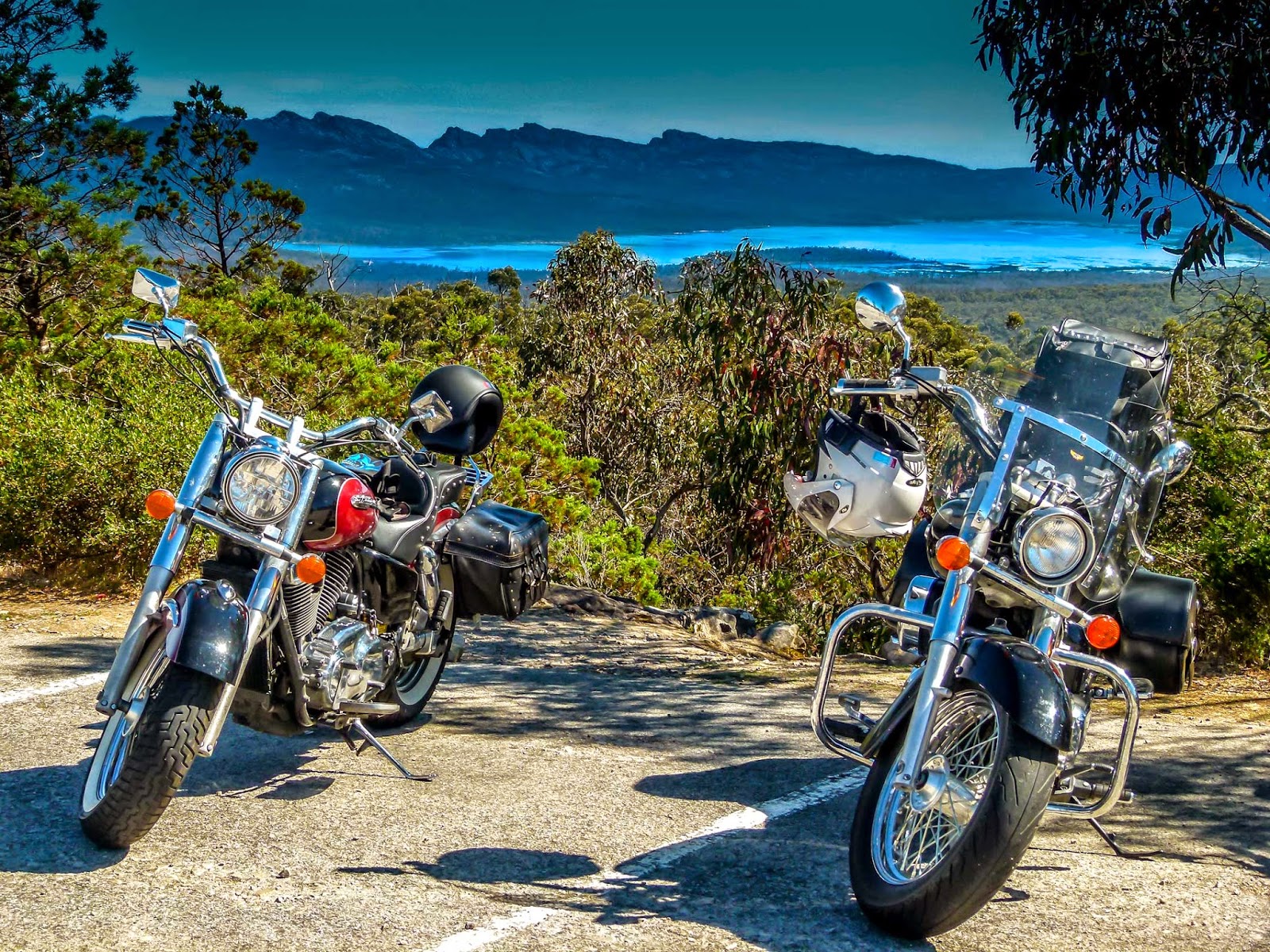 Corky joined us on her recent acquisition - a bright red CanAm Spyder. 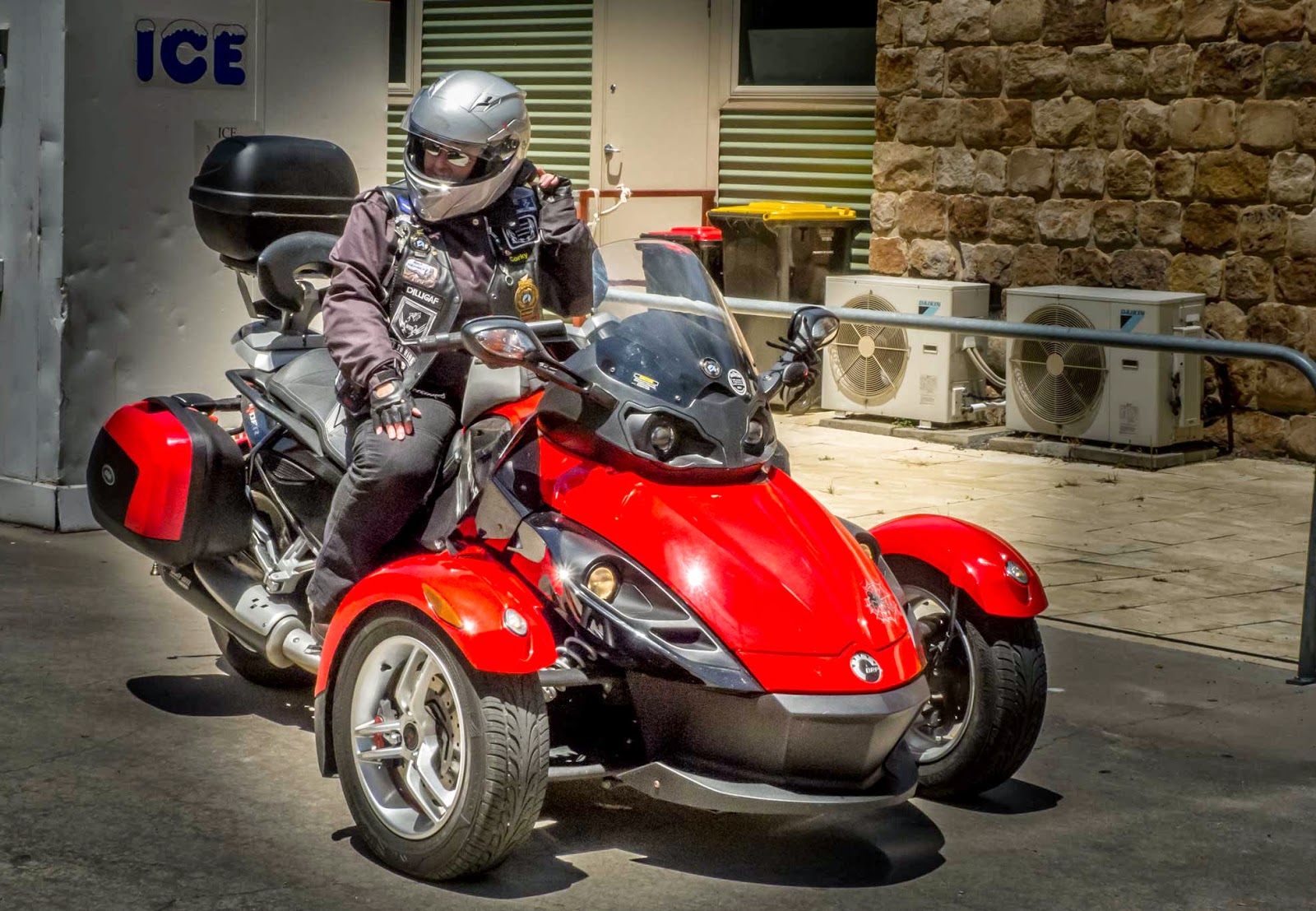 Then, it was time for goodbyes and soon a group consisting of those of us based in Melbourne and beyond commenced the long trek home. Luckily I had been invited to spend the night in Ringwood at the home of a fellow rider and when we pulled into his garage at 7 pm it was nice to get off the bike and enjoy a few beers and a BBQ'd T bone steak. No trouble getting to sleep last night but this morning I was woken by a loud thunder clap. Looked at the weather radar and the whole world seemed to be about to be over run by patches of dark blue. Forecast said rain and storms so after a hasty coffee it was back on the bike to see if I could outrun the approaching storm. I think I managed to just stay ahead of the worst of it and only experienced a few drops here and there.
A great weekend and home just in time.