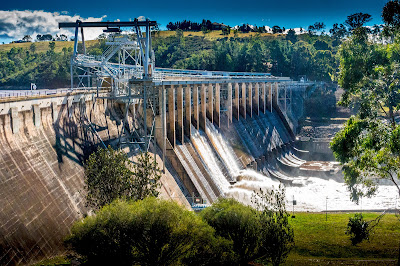 After some of the worst riding weather in a long time today promised to be a reasonably mild and most importantly, dry day. Joined my brother Luke (Kawasaki Vulcan S) on a roughly circular route through the Gippsland countryside. I rode the Beemer mainly because the Honda wouldn't start due to a flat battery after such a long period of inactivity. Our ride took us past Loy Yang Power Station and through Gormandale. After climbing Powers Hill we took a left turn toward the coast at Woodside. Very little traffic and mild conditions and an interesting road - it doesn't get any better than that. At Woodside we joined the South Gippsland Highway which in turn took us to Sale, but not before visiting the famous swing bridge on the Latrobe River. The high level of the river was a clear indicator of the amount of rain we've had in the past weeks. In Sale we enjoyed a nice lunch and coffee at a great bakery before climbing on our bikes again and then on to Maffra. By now it was becoming a bit overcast and the temperature was dropping but we drove on for a visit to the dam wall at Glenmaggie Weir. There seemed to be major release of irrigation water going on, we could hear the roar of the escaping water from some distance. Took a few photos before heading off on the last leg, for me anyway, back to Traralgon. Great to be back on the bike again especially with my brother.