2 July - Walhalla from the air

Spent the afternoon in Walhalla today but not on the motorbike. Last week I took delivery of my Phantom 4 Camera Drone and I felt confident enough (after three flights from my front lawn) to take it to Walhalla, a 19th century mining town near here, which I often visit on the bike (see my last post). The first stop was at the Thompson River Bridge to photograph the Goldfields tourist train, the only existing remnant of a line built 100 years ago to bring goods into and gold out of Walhalla, crossing the railway bridge. 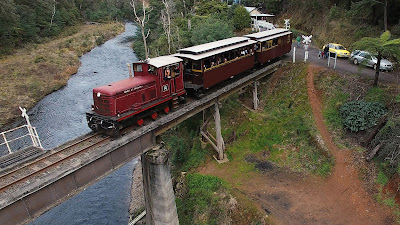 Many of the passengers on the train had watched me prepare the Phantom for flight so as the train passed there was lots of waving and photos being taken. The video of the event is absolutely spectacular.
Then on to Walhalla for a birds eye view. 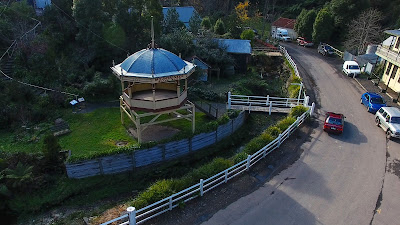 Being a Saturday the town was quite crowded and as I didn't want to fly the drone directly over people I restricted myself to a five minute flight to get some good aerial views of the town. 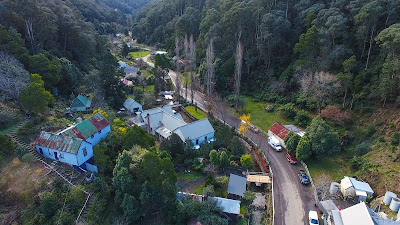 These shots were all taken from about 50m. I will go back on a quieter day and get higher altitude shots of the whole town. 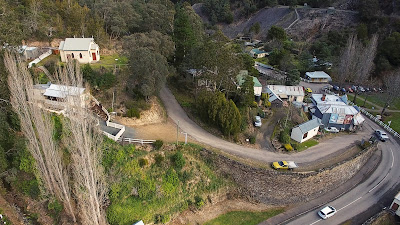 The drone provides a video feed to my iPad and it is quite exciting to get a live view - it's almost like being up there yourself. Some people are using Virtual Reality goggles to fly their drones and the experience is almost like being in the drone. At this early stage of my flying career the focus is mainly on acquiring good flying skills and to get some confidence in the drone itself. My next challenge now is to find a way of transporting the drone on a motorbike so that I can combine flying and motorcycling so watch out for more aerial views.