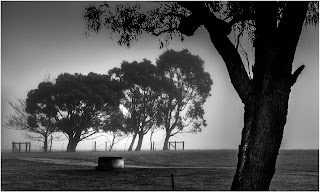 This winter has been one of the coldest and driest I can remember. Most morning start with heavy fog and hopefully by 10 am or so the fog has lifted and clear skies emerge. Not keen on riding a motorcycle in the fog but I have been venturing out on four wheels to capture a few foggy landscape images. 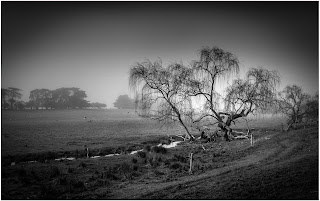 I find most 'fog' pictures look best in Black and White but I did like this one in colour. 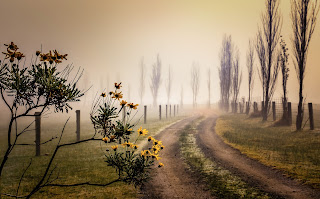 This morning followed the same pattern. Heavy fog well into the morning but by 11 am a chilly but bright sunny day emerged. Took the BMW for a trek over the Strzelecki hills for a coffee and lunch at Mirboo North. My usual motorcycle themed cafe (InLine 4) was closed so had to make do with the local bakery which is pretty good. From here I carried on through Dunbalk and Meenyian and then turned East on the South Gippsland Highway to take the return leg home via Yarram. With the grip heaters on full power and thermal underwear I managed to avoid hypothermia with temperatures varying between 9ºC to a balmy 13ºC.
My right knee (the one with the screws) functioned fine but it did ache a bit in the cold weather. Altogether though a very enjoyable ride.