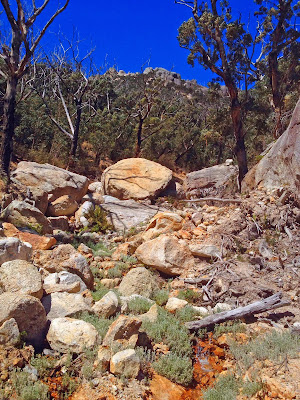 After the disastrous floods of 2011 the road to Wilsons Prom was out of action for some months. When it eventually reopened the road to Mt Oberon remained closed as large parts of the roadway had washed away. A few weeks ago re-construction was completed and it is now open again to traffic. I took the BMW down there this morning and after an absolutely delightful ride ride I arrived at the Mt Oberon car park which was packed - presumably lots of hikers taking advantage of the fine weather to explore the many walking tracks. The road from the park entrance to Oberon and Tidal River is an absolute motorcycling delight. I've heard many people complain about the 80kph speed limit but it actually forces you to ride at a speed which allows you to take in the sights of which there are plenty. After a "Prom Burger" at Tidal River it was time to head back. To my sheer delight I spotted two juvenile deer crossing the road just in front of me - I had no idea deer inhabited the Prom. The ride home, through Foster and Yarram was a bit windy but enjoyable just the same.