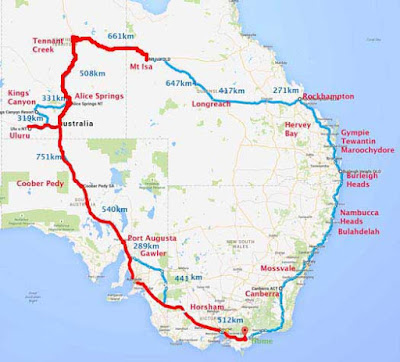 We left Tennant Creek at first light this morning (7:15) knowing we had a long trek ahead of us. The drive to Mt Isa along the Barkley Highway is 670km and the road is almost dead straight through the desert. Only two signs of life along the way, both roadhouses offering fuel, accommodation and food. The first was at Barkley Station and we filled up the tank here, because the next fuel was at Camooweal - over 250 km away. In this part of the country you really can't drive past any opportunity to fill up because there will not be another for a few hundred kilometres. The scenery doesn't change much driving through the desert but today we saw the first appearance of termite mounds - thousands of them. We arrived in Mt Isa at about 4:30 and started looking for a caravan park. The first one couldn't fit us in, and we just managed to squeeze into the second one. I think the issue is that there are a lot of people working in the mines up here on short term contracts and staying in their caravans. We'll stay here a couple of days and then continue to move east through northern Queensland. After a couple of weeks of red dust, it will be nice to reach the coast to see grass again. Hope to post some photos tomorrow after a look around Mt Isa.

This morning while we were enjoying our first decent coffee for a while at the Barkley Homestead, a very friendly 'cowboy' approached us and took an interest in where we were from and where we were going and so on. He and his wife, his little girl and brother had just driven all night from Townsville and were on their way to Darwin (a 2,500 km trip). After a while I asked him what he did for a living, and without a trace of irony replied, I am Knackers Brooker and I'm Australia's top rodeo clown. At the age of 45, and after two broken necks and a ruptured testicle, he still rides and wrestles bulls here and overseas at least once per week. It is then we really realised we were in the 'top end'. Tonight I thought I'd Google Knackers, and I did. He's the real McCoy. I wish him luck, he is a nice guy and we enjoyed our chat with him. 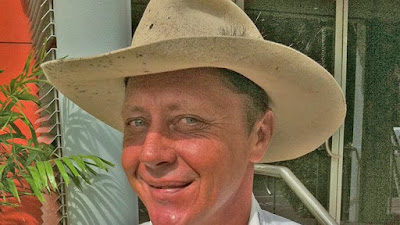