6 May - Warburton for Lunch 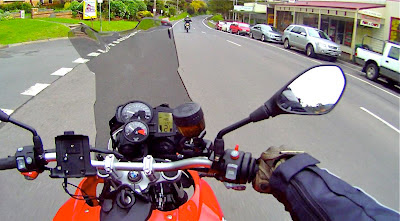 The weather forecast for today was "some showers". Looked out the window and it was pretty bleak. As I was deciding whether to ride or not the phone rang. Zane wanted to ride and we arranged to leave from our house at 10:30 for a ride to Warburton via Noojee, Powelltown and Yarra Junction. On with the thermal underwear as the top forecast temperature was 15 °. By the time we reached Willow Grove it was raining, not hard but steady and the skies ahead were dark grey - not too promising. Riding through the forest on the approach to Noojee the temperature had dropped to 9 ° and the drizzle continued.. Thankfully the grip heaters were switched to high.  After a quick diversion to Neerim Junction for fuel for Zane's bike we decided to push on. Reached Warburton around 1 pm and settled in for lunch at Three Sugars - which had a blazing wood fire going. By the time we reached Warburton the temperature had risen to a balmy 12 ° and the rain had stopped. After a very pleasant lunch we rode back to Neerim Junction for another fuel stop and then continued home along the Old Sale Road. Despite the marginal weather it was an enjoyable ride and we reached home around 3:45.