28 November - The (Down Under) Adventures of ScooterBob

My regular readers may remember that my blog of 27 October noted the passing of fellow motorcycle blogger Bob (BobSkoot) Leong in August Riding the Wet Coast (British Columbia, Canada). I never had the opportunity to meet Bob, but we followed each other's blogs and exchanged the occasional email. The outpouring of sympathy and comment from the blogosphere confirmed that Bob, through his blog and through personal contact, which he always welcomed, had touched many people and we will all miss his sharing his almost daily record of his experiences, good and bad, and on and off the motorcycle. Bob had lots of plans for future motorcycle trips and some of his fellow enthusiasts came up with the brilliant idea of ScooterBob. ScooterBob is a small wooden carving of a Vespa motor scooter which at one time belonged to Bob. The brilliant idea is that Scooter Bob would travel the world and be taken on motorcycle adventures, that Bob would have enjoyed,  by Bob's blogging friends and that the ongoing record of Scooter Bob through various blogs would perpetuate the spirit of this enthusiastic and charismatic man.

I expressed an interest in hosting ScooterBob down under in Australia, and last week my post lady delivered him to the front door. Today, on a brilliant sunny Australian spring day I took Scooter Bob on his first Australian adventure to the old gold mining town of Walhalla. This 'ghost' town is located in the mountains to the north of my house and has been a frequent motorcycle destination for me and any visitors who ride with me. Our first stop was the Tyers lookout which provides a good overview of the Latrobe Valley where I live.

This spot provides a great view of the rural landscape dotted with the occasional large power stations. 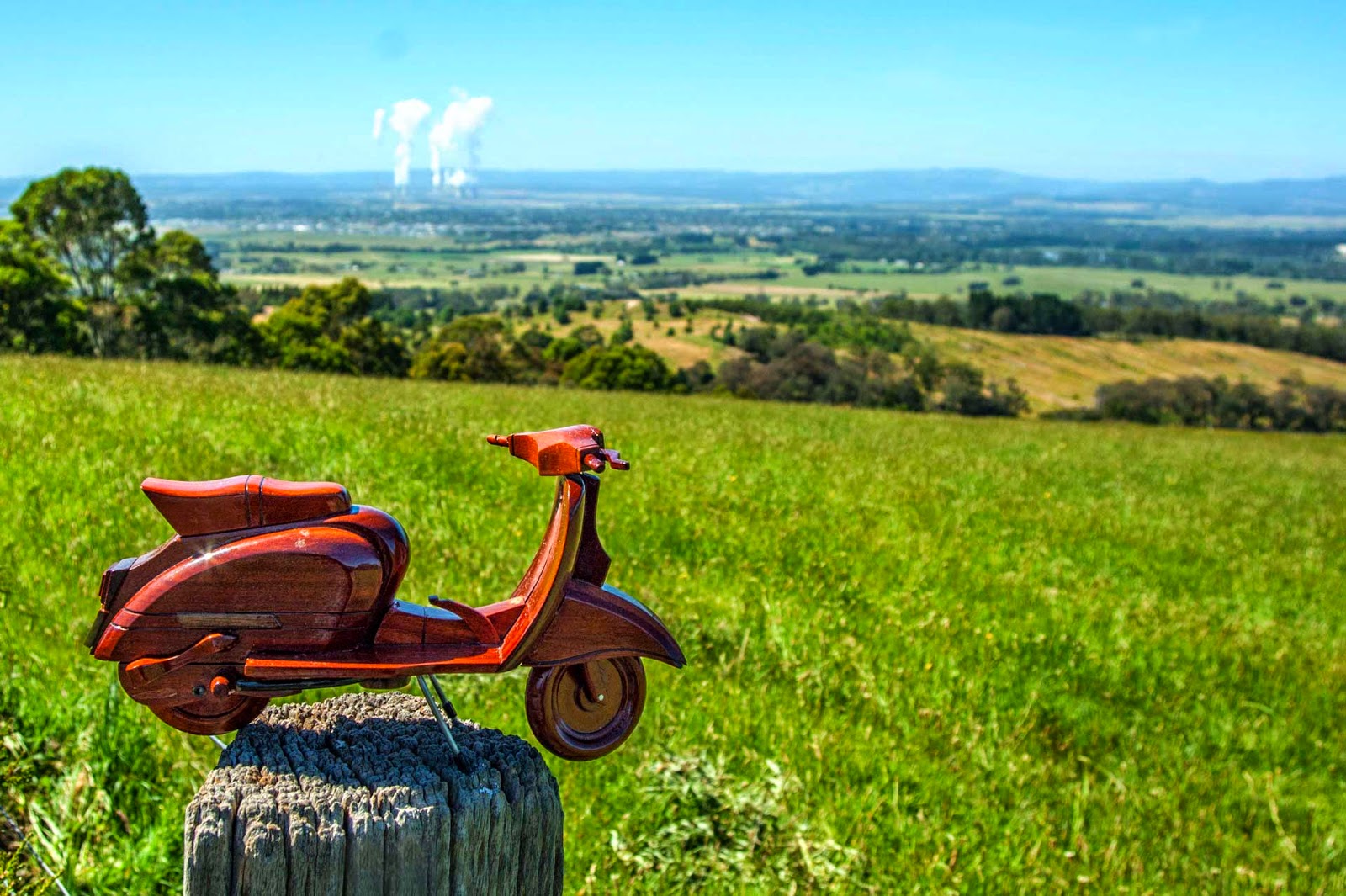 Walhalla was a major gold producer over a period spanning the 1870's to around 1910. This photo shows the vault where all the gold was stored prior to transport to Melbourne. 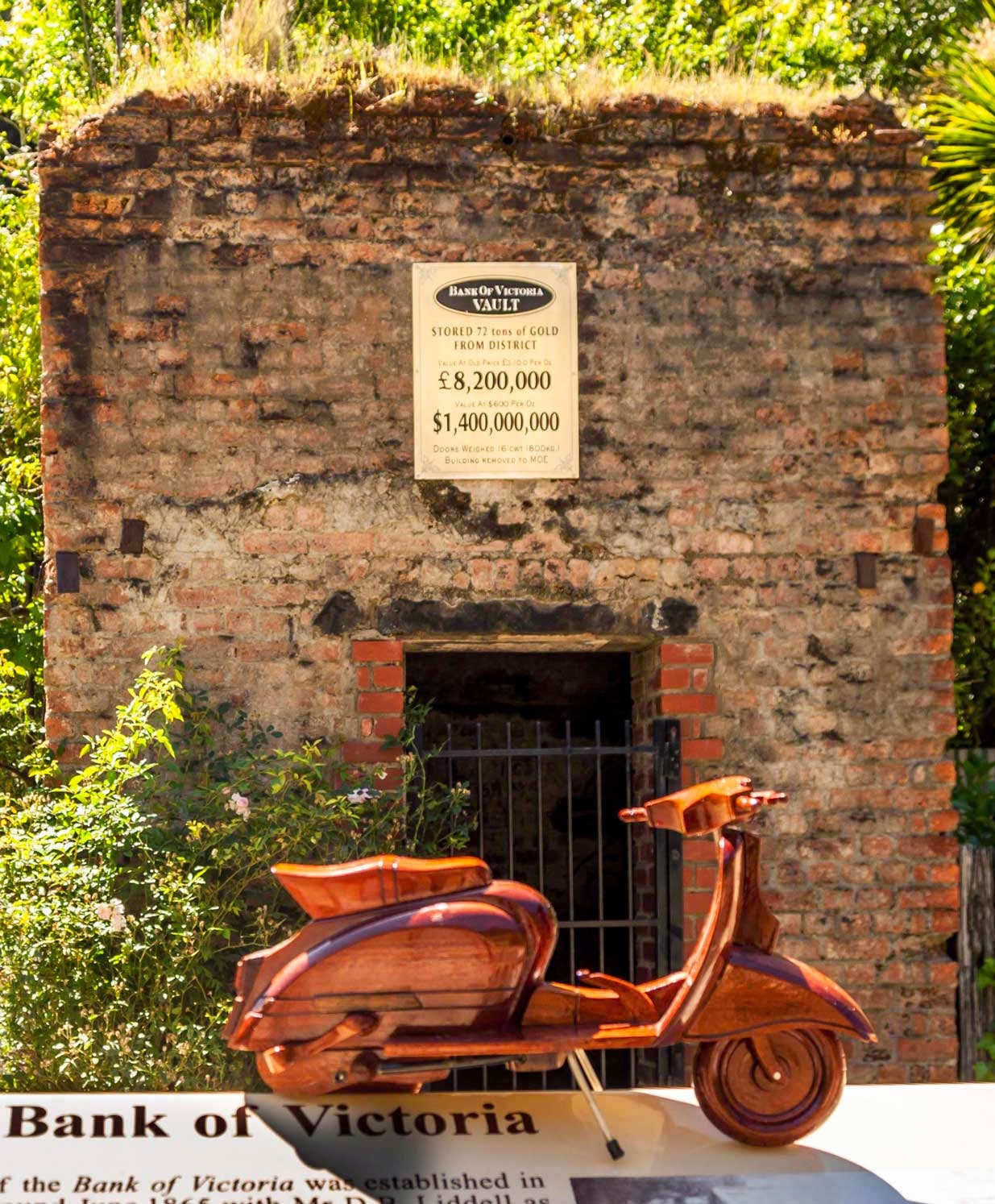 The value of gold stored in this vault, in today's money is about $1.4 billion dollars. Today, this town which once had a population exceeding 4,000 now has a mere handful of inhabitants who maintain a small but vibrant range of tourist activities including visits to one of the old gold mines. 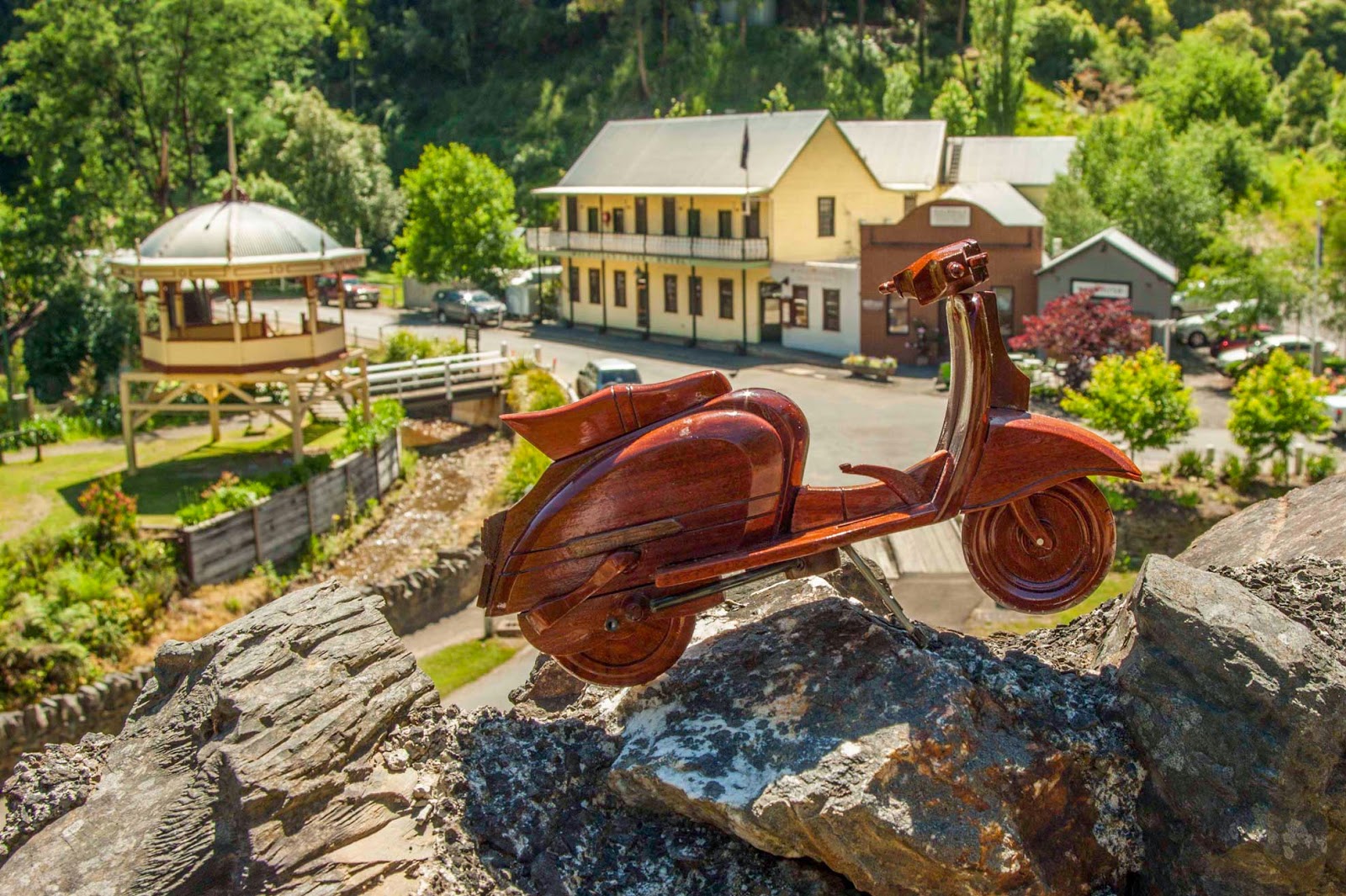 One of the few intact reminders of the glory days is Windsor House, once owned by a rich merchant which is now restored and is operated as a B&B. 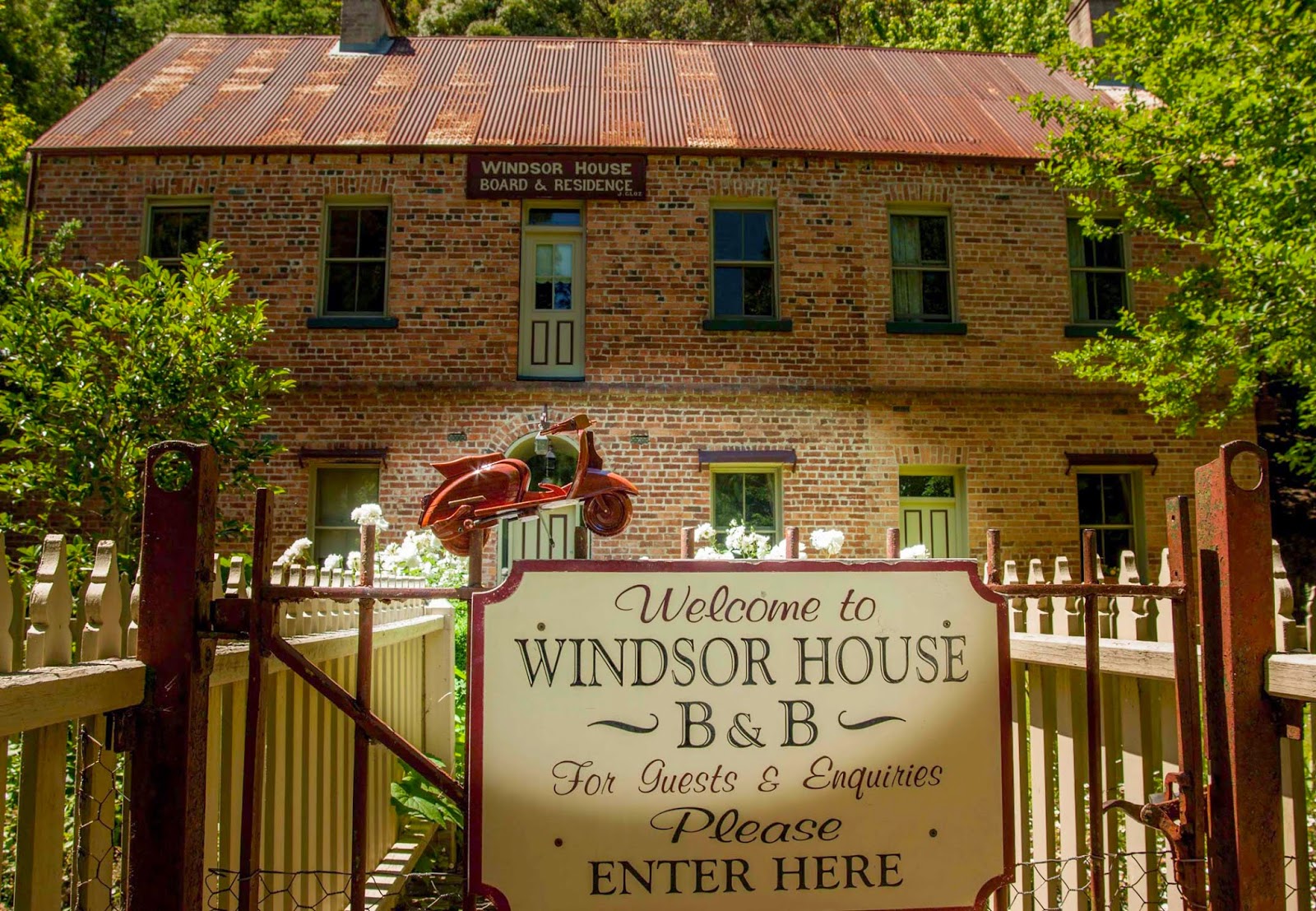 While much is gone, much remains and a number of dedicated residents have, over the past few years restored some of the key buildings. There are reminders of 'the old days' wherever you look. 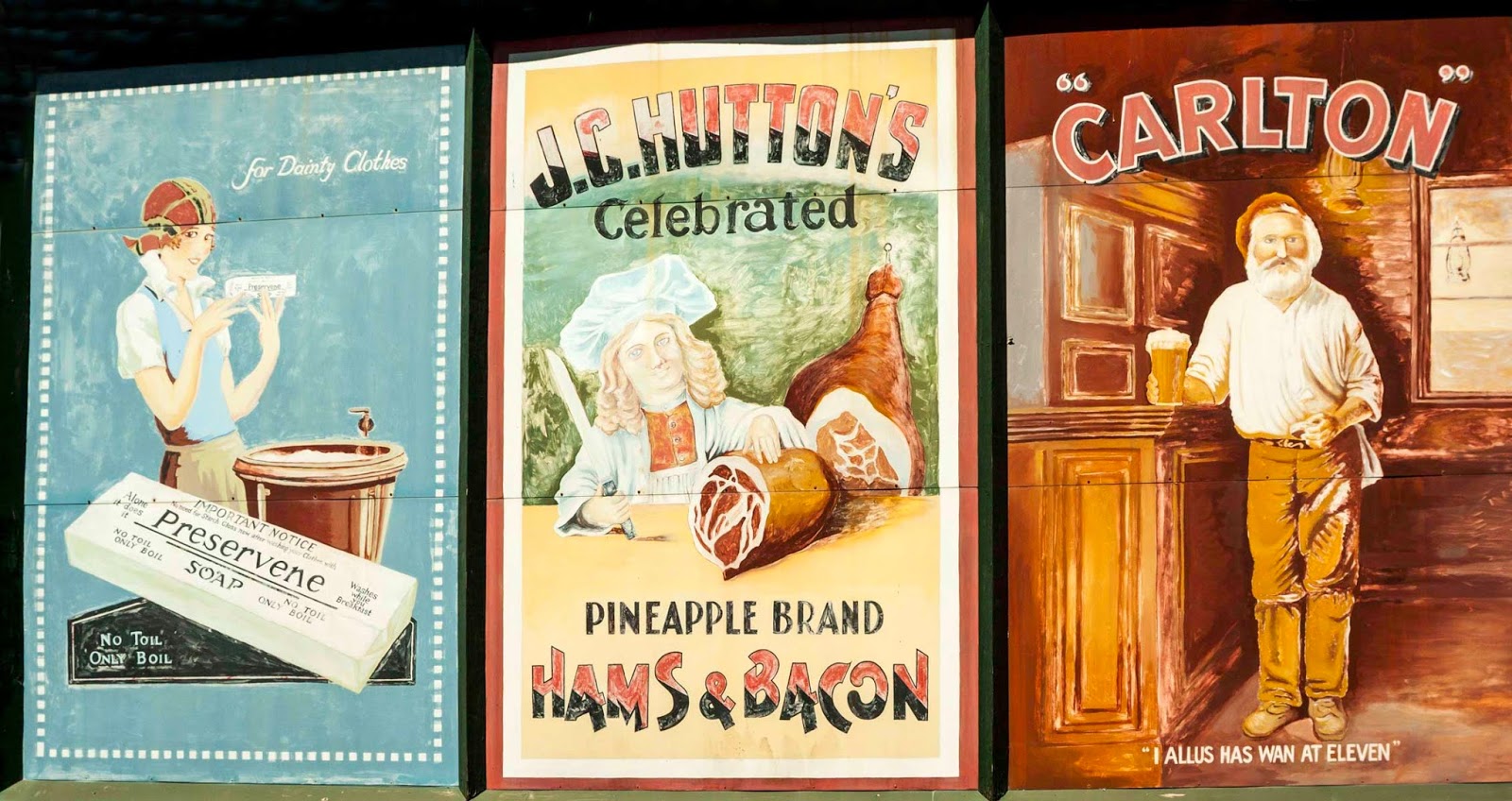 My adventures with Scooter Bob will continue for a few more weeks until is time to pass him onto the next of Bob Leong's friends. My rides will go the places I think Bob would have enjoyed. Although I never met him, I think I got to know him a little through his blogs and I know for certain I would have like him a lot.