After a hearty breakfast we left Dubbo this morning at 9:00 am. Once again we were greeted by a cool but very clear day and it was a great sensation to be part of a group of 7 bikes all thundering along the highway. After a quick fuel stop we got some serious miles out of the way before stopping in West Wyalong for a coffee. Then, we continued up the Newell Highway with the aim of having lunch in Forbes. The great weather held out and we had lunch sitting outside a bakery in Forbes. It was so pleasant we really had to be disciplined to put our riding gear back on and continue our ride.
Our next stop was for fuel in Parkes and once we were all filled up we continued north with the intention of visiting the famous Parkes Radio Telescope or "The Dish" as it is better known. This telescope played a vital role in the Apollo 11 mission which resulted in the first landing on the moon. The drama associated with its role is captured beautifully in a great Australian movie called "The Dish". 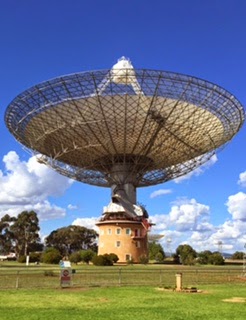 We were lucky, as we arrived they were positioning the dish in the vertical position to provide access to the receiver room which is the white structure at the focal point. After ice creams all around and a nice rest of 30 minutes or so it was time to undertake the final part of this leg of our trip - 100 km's or so to Dubbo. Fortunately I had preprogrammed my GPS with the address of the Matilda hotel and we were able to ride straight there, arriving around 4:30.
This evening we were booked into a steakhouse (Lion's Pride) and were due to meet a couple of our Dubbo based members (Brenda and Terry) who are unable to attend the AGM but wanted to catch up with the group. To our surprise we found that dinner was paid for by an anonymous Dubbo business man - who I suspect is Terry. A great night was had by all - thanks guys. Then to top it all off, one of our crew, Frank, had a birthday today and we were treated to a birthday cake with sparklers.

Tomorrow we travel to Goondiwindi which is on the Queensland border. There is some nasty weather forecast for the  next couple of day, so the wet weather gear may be needed.