1 November - New biker in the family

My younger brother Luke has been thinking about buying a bike for a while now and last Friday he took the plunge. After getting his learners permit earlier in the week he picked up his brand new Kawasaki Vulcan S 650cc Cruiser. 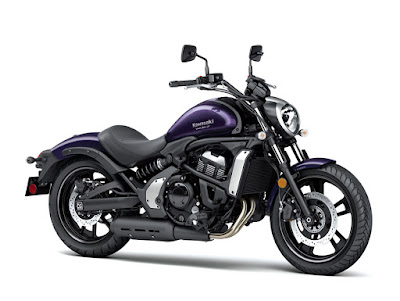 It's a beautiful bike and while it is approved for beginner riders, it seems to have enough power and features to become a 'keeper'. After picking up the bike on Friday we took off on a little 90km ride to make sure everything was OK, but today we had the chance to take if for a real ride. We headed off  from Moe at around 10:30. 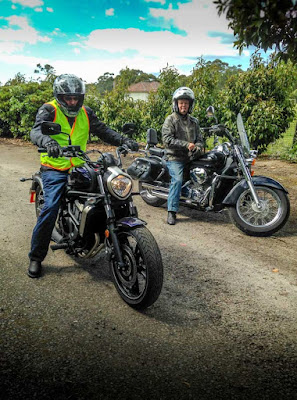 Took the road to Mirboo Nth through Trafalgar and Thorpdale. First stop was fuel in Mirboo Nth and then a quick coffee at the Inline 4 Biker Cafe just up the road. Plenty of bikes and riders around and the Inline 4 is alway good for a chat with other riders. Now fully replenished we continued on to the beach resort town of Inverloch and had lunch at the bakery (Tom the Pieman). The weather forecast promised late showers and thunderstorms and in Inverloch they didn't look to far away, and with the temperature quickly dropping we mounted up for the ride to Meeniyan and then home through Mirboo Nth, Thorpdale and Trafalgar. As I'm typing this I heard a big thunderclap so the weather is closing in. Got home just in time after a great ride.