Took off this morning at 08:00 to join a small group travelling to the Snowy Mountains to join the annual Snowy Mountains ride which is a fund raiser for Childhood Cancer Research. Skies were overcast and a gentle drizzle created a somber atmosphere as we left Traralgon. The first stop was in Bairnsdale for fuel and then on to Bruthen for morning coffee. By now the skies had brightened and we were tempted to discard our rain gear but glad we didn't. The run to Omeo along the Tambo River was fine but in Omeo it was raining steadily. Added some more fuel to the tank and after lunch at the bakery it was off to Angler's Rest and then on to Mitta Mitta. This section which crosses a mountain range proved to be one of the most challenging rides I've had. Not only did the rain become heavy but as we gained altitude it became quite foggy. Add to this 80 km of very winding mountain roads and very soon riding became quite serious business with total concentration required. The winding foggy road was relentless and it was with a collective sigh of relief that we pulled up for drink at the pub in Mitta Mitta. By now it was bucketing down, but at least the fog was gone and we were out of the mountains. We finally reached our destination in Tallangatta where we were booked in to the Victoria hotel. My room has two beds one of which has an electric blanket. Turned the blanket to high and placed all my damp riding gear on top of it. 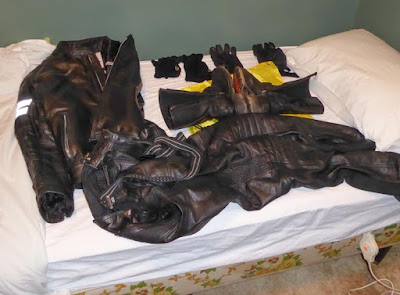 Hopefully it will be dry by the morning. Tomorrow we join the actual ride which takes us through Khancoban and Mt Thredbo, before finishing up in Jindabyne for two nights.