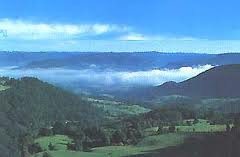 I left Batemans Bay this morning at 08:00 after walking about in vain looking for breakfast. At least I was able to fill up the bike otherwise we would not have got far. Eventually, some miles down the road I found the Milton Heritage Bakery (1870) which served a good coffee and a bacon and egg sandwich. The planned route continued north to Nowra and then left up to Kangaroo Valley. This turned out to be the highlight of the day. This road winds its way up through the mountains, and then plunges into the most incredibly beautiful valley. The township of Kangaroo Valley is equipped to handle visitors with lots of interesting shops, cafes and restaurants. I checked out the caravan park and it looks impressive too with lots of shaded grassy sites. The whole road which eventually brings you out on to the Southern Tablelands and Moss Vale is probably the most beautiful road I have ever travelled on. Sheer joy on a motorbike.

From Moss Vale it was straight on to the Hume Highway at Mittagong. What a change of pace after idyllic windy country roads. Suddenly you're travelling at 110 km/hr alongside two other lanes of huge truck travelling even faster. The turbulence you experience on a bike when a huge slab sided truck passes you at 120 certainly tests your nerves and riding skill. By now it was time to add some fuel to the Beamer and to sort out the aching bum muscles, which was accomplished at a huge road side service centre a few km short of the M7 motorway. As we know from our caravan trips, in order to get from the M7 to the Pacific Highway you need to traverse about 10km of sheer chaos called Pennant Hills Road. It is usually quite stressful towing the van, but on a motorbike with lots of stops and slow moving traffic it is quite a test. Then, from the frying pan into the fire, the first 50 km of the Pacific Highway out of Sydney also requires your full attention. Finally about 50 km north of Sydney sanity returns and you can afford to relax a little. Once you've crossed the Hexham Bridge just outside Newcastle all traffic quickly dissipates and thoughts turn to where to get the next fuel and accommodation. By around 4 pm, even though there was plenty of daylight left the arms were getting a bit cramped and the tank was getting low once again. 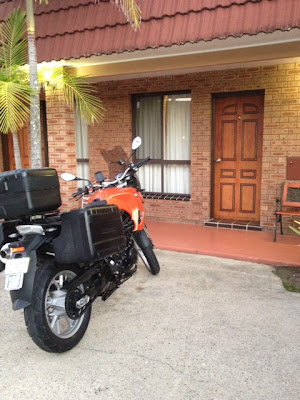 At Buladelah which is about 240km north of Sydney I hit the jackpot - a service station, next to a motel which has a licenced restaurant. Time for a shower and a beer.