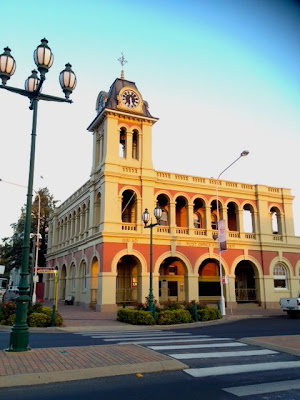 Left Goondiwindi at 07:30 this morning after a solid night's sleep. The temperature was 13 ºC, quite brisk, but the sky was blue and it warmed quickly. Within minutes I had crossed the border into NSW.
First stop was for breakfast and fuel in Moree - coffee and banana bread in the local MacDonalds. My route was straight down the Newell Highway which takes you through hundreds of kilometers of the flattest countryside imaginable. The wind is continually pushing the bike in all directions, and at times you're also contending with road trains which invariably travel much quicker than I'm prepared to so when they pass it's like a two story block of flats going by. Generally though the Newell Highway allows you to cover a lot of km's quickly. Stopped in Dubbo for lunch and then pushed on through Parkes - saw The Dish to the left in the distance and then on to Forbes. Forbes is one of the most beautiful country towns in Australia - it has spectacular public buildings everywhere. Got a room in the Lamplighter Motel and had dinner in the NSW Services Club just across the road. I ordered an eye fillet steak and was absolutely amazed when they brought out two large eye fillet steaks on one plate. Apparently that's a normal serve out here, and I felt distressed leaving one of them. Anyway, I hope to get away early again tomorrow and if the weather cooperates I should end up close to home by tomorrow night leaving a shorter ride on the last day - we'll see.