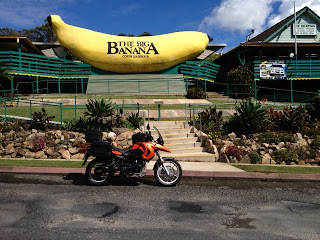 Left Bulahdelah at 07:00 this morning. A brilliant day but at that time the temperature was only 11ºC. The grip heaters on the BMW saved the day. The route for today was straight up the Pacific Highway and with some long stretches of good road I was hopeful of reaching Queensland today. Made a short stop to take a picure of the bike in front of the big banana in Coffs Harbour. After a good run with the usual stops for nourishment, fuel, and toilet, I found myself at the Queensland border at 3 pm. As I still felt pretty alert I thought I'd carry on to Gympie, which was reachable before or shortly after nightfall. So up the Gold Coast Highway, and then on to the Gateway Freeway. A big thrill was riding over the spectacular Gateway Bridge. Looking good so far, only 4 pm and only one more fuel stop required. That's when things went pear shaped. Just as I was approaching a service center near the Brisbane Entertainment Centre, traffic started to slow and just at the exit, came to a stop. So into the service center and wait. The bad news from the locals was that these jams here are a daily occurrence and can last a couple of hours. So, time for a coffee and a moment of relaxation. At this stage I was approached by Mike and Pam who had seen me arrive on the Beemer. This interesting 72 year old couple have both been riding all their married life and have many a trip across Europe and USA under their belt. In fact they were driving a utility with two BMW 1200 GS's on the back. They were on their way back from a couple of weeks of riding around Bathurst. Mike has rigged the back of his ute with a couple of electric bike loaders. You simply secure the bikes into individual cradles and the press a button. Individual electric winches load each bike on to the ute. Very impressive.

At this stage it was decision time. The traffic jam was starting to clear and it looked like being a nice evening. I hadn't planned to ride at night, but after drinking coffee and chatting with Mike and Pam I felt quite relaxed and alert and thought Gympie was well within reach. At this stage Mike and Pam suggested I follow them to their home in Caboolture and spend the night. What a kind offer, I wish I had accepted it, but at this stage I thought a night ride on a balmy evening would be great. We said our goodbyes and off we went. Thirty km later events turned shitty - it started to pour and a strong wind sprang up. Suddenly being on the bike in the dark became quite scary. The combination of decreasing visibility and sheets of water laying on the road while surrounded by cars wanting to travel fast convinced me to get off the road. As the turnoff to Caloundra appeared I took it and found a motel. Right now sitting in the motel it is raining so hard that water is coming in through the door of the motel room. Any way the bike is under cover and I'm out of the weather, which leaves less than a 1 hour ride tomorrow to reach Gympie. The forecast is for showers clearing.