After leaving Brisbane we enjoyed 4 days at sea. Quite a spectacular part of the cruise as we travelled through various channels in the Great Barrier Reef, and lots of islands as we passed the northern coast of Queensland. Then after a couple of days we reached Cape York Peninsula the most Northern part of Australia. The ship then turned on to a westerly heading and into the Torres Strait between Australia and Papua New Guinea. 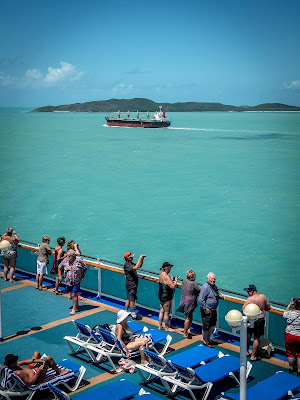 In the strait we passed many of the Torres Strait islands in perfect weather. Blue skies and crystal clear water everywhere. The highlight of this part of this trip was passing Thursday Island. To pass through this channel requires the use of a reef pilot as in some places there is only 3m under the keel, and the channels can be quite narrow. 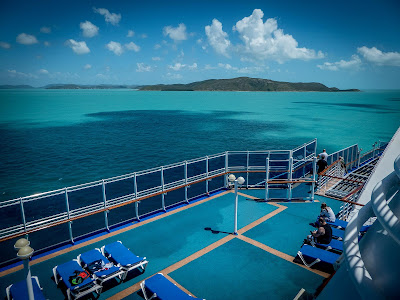 During this four day sea passage we experienced perfect weather and we spent most afternoons in a hot tub and just relaxing in a deckchair watching this magnificent scenery glide by.
Then, when we woke this morning we were berthed in Darwin, the capital of the Northern Territory. Darwin was almost totally wiped out by Cyclone Tracy on Christmas Day 1974. We had been there shortly before the cyclone and in 1976 when we moved back to Victoria and so there was not a single feature of the new Darwin that we recognised. In the past 42 years Darwin has re-emerged as a large modern city complete with high rise buildings. We had a pleasant walk (35ºC) through the CBD and then took a bus out to Casuarina to visit a large new shopping centre where I managed to buy my Apple Watch which I had been looking for. 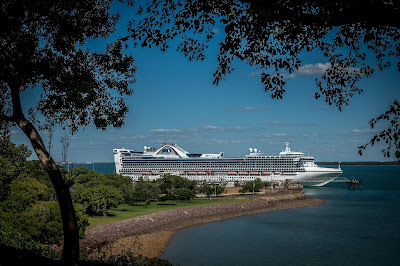 We then walked from the city back to the port to see the magnificent view of the Golden Princess berthed in the harbour, and waiting to receive us back for afternoon tea. Tomorrow is another sea day before we arrive in Bali the following day.
Posted by Theo van der Meulen at 6:22 PM