Overnight the Golden Princess moved up the coast of Thailand to berth at Laem Chabang which is the port for Bangkok. As Bangkok was a 2-3 hour bus ride away we decided instead to catch the shuttle bus to the holiday resort town of Pataya. Pattaya is best known for its fabulous beach and associated water activities such as SCUBA and parasailing, its shops and markets and it’s racy nightlife.
We spent most of our time shopping both in the air-conditioned departments stores as well as in the local markets. 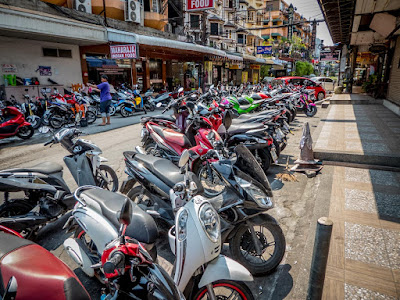 One obvious feature of these Asian cities is the overwhelming presence of motorcycles in all shapes and sized, particularly of the step through scooter variety. To see one these tiny machines loaded with a couple of adults and one or two children, mostly without protective equipment is an experience indeed. By 3pm we were worn down by the bargaining, the heat and the humidity and we caught the shuttle bus back to the ship. This gave us time for showers and a little snooze before dinner at 6pm, and then the daily show in the Princess Theatre, which featured a singer called Louis Hoover performing a tribute show to Frank Sinatra - very good show. 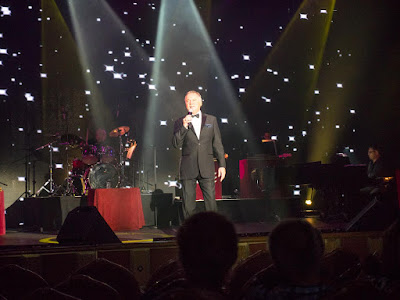 After the show we went to the top of the ship to watch our departure from Laem Chabang. This was made especially interesting because our sister ship the Sapphire Pprincess was departing at the same time and the evening was beautifully lit by a full moon. 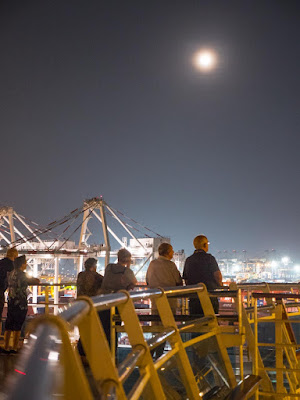 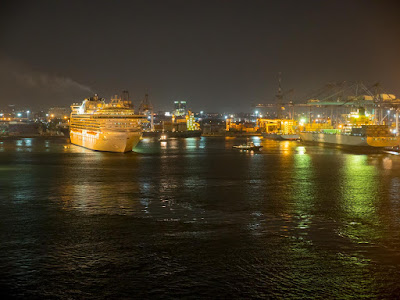 Tomorrow is another sea day before we get to Vietnam.
Posted by Theo van der Meulen at 4:24 PM