A couple of nights ago we enjoyed one of the most spectacular sea departures we have ever experienced. The Golden Princess was berthed right between the Sydney Harbour Bridge, Circular Quay and the Opera House. As the sunset approached the city lights started to twinkle and we sat on the topmost deck to watch it all. To depart from Sydney the ship had to reverse away from the dock and turn until the stern, where we were sitting was almost directly below the Harbour Bridge. 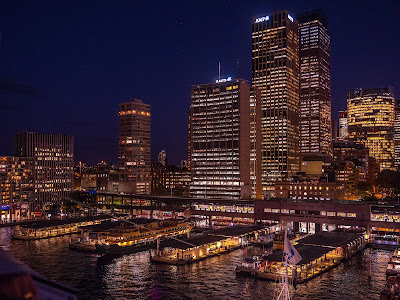 Then it we proceeded slowly toward Sydney Heads to continue our trip to Brisbane. The night time views in every direction were absolutely breathtaking. 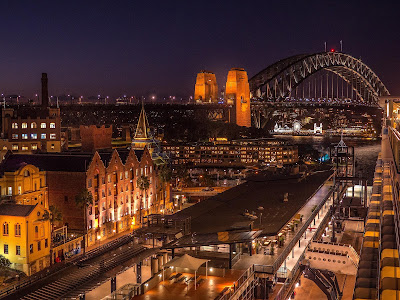 As we departed from Sydney the Harbour Bridge was directly behind us and the opera house was magnificent on our right side. 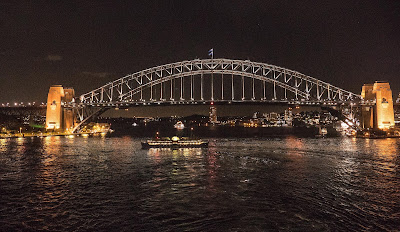 I must have taken a couple of hundred images as well as lots of video. It was a truly magnificent spectacle. 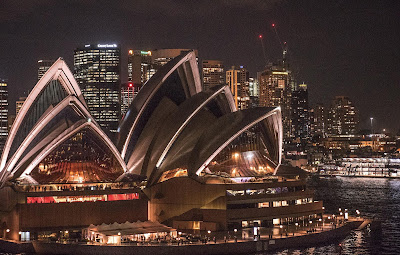 Yesterday was a sea day. In the afternoon we found a deck with a huge hot tub and lots of spots to sunbathe so we had a very relaxing afternoon. After dinner we attended a great show at the Princess Theatre - it was a magic show and a full house. A really amazing performance.
When we woke this morning we were berthed in the Brisbane river, and after breakfast we caught a shuttle bus into Brisbane for a bit of shopping and sight seeing. When we depart later today we will have four days at sea before reaching Darwin. I don't expect to have any internet access before we reach Darwin.
Posted by Theo van der Meulen at 4:17 PM